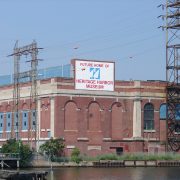 Check out Heritage Harbor’s new website – heritageharbor.org – and the great coverage they got in kicking off the redevelopment of the appropriately-named Dynamo House, a former power plant that will become the Museum’s home in a few years.  They’ve also started an education blog at heritageharboreducation.blogspot.com.

A few members of the Affiliations staff had the pleasure of meeting with Seth Hopkins, Director of the Booth  www.boothmuseum.org. Seth is a Northerner heading up the Booth in Cartersville, Georgia. The museum’s collection focuses on contemporary Western art, including cowboy art! On permanent exhibition are presidential portraits, civil war paintings and Western themed ephemera. Although the museum’s mission is to exhibit and interpret Western art, they are lucky to have a collection of 14 serigraphs done by Andy Warhol. Seth is looking forward to collaborating with the several other Affiliates focused on western art and heritage.

Mark your calendars!  On November 19, the History Channel will debut a film called Desperate Voyage, about the crossing of the Mayflower in 1620.  Some of the film was shot at the replica of the ship, Mayflower II, owned and interpreted by affiliate Plimoth Plantation.  www.plimoth.org

Plimoth Plantation will be holding premier screenings of the film in Boston and Plymouth in early  November. Keep an eye out for the Mayflower’s 50th anniversary festivities, taking place summer 2007.  congratulations Plimoth!