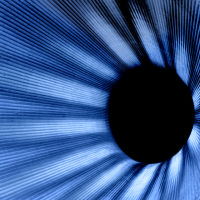 The Kansas Cosmosphere and Space Center, our Smithsonian Affiliate in Hutchinson, Kansas, served as the perfect backdrop for the opening stop of the national tour of In Plane View/Abstractions of Flight, a traveling exhibit from the National Air and Space Museum, featuring the remarkable photographs of Smithsonian photographer, Carolyn Russo. As a guest attendee on January 30, I found myself in awe of the creativity that surrounded me.  The Cosmosphere is a tribute to the educational creativity of Patricia Brooks Carey, who in 1962 started a small planetarium on the grounds of the Kansas State Fair, in what was described to me as “an old chicken coop.”  The chicken coop became the Cosmosphere in 1980, and has since grown into the second largest collection of US space artifacts in the world, and the largest collection of Soviet space artifacts outside of Moscow.  More than 125 objects on loan from the Smithsonian’s National Air and Space Museum help tell the story, among them the Liberty Bell 7 spacecraft and Apollo 13 command module.

Russo’s creativity comes from an unmatched gift for seeing designs and patterns in airplanes and spacecraft and for translating them into alluring and thought-provoking photographic images.  In Plane View consists of 56 large-format photographs that remind us that machines of flight are more than hunks of riveted metal attached to large engines, and flown only by the fearless.  They are, through Russo’s artistry, artifacts imbued with mystical geometries, strange symmetry, sensuous curves, and bold colorations.  What Amelia Earhart called “the aesthetic appeal of flying” comes through in unusual and unexpected bursts in Russo’s photographs.  Chris Orwell, director of the Cosmosphere, and his staff did a terrific job of mounting the exhibition and hosting the opening reception.  The photographs were hung with  exceptional care, and stood out wonderfully under the newly installed lighting system.  With a soft harp playing in the background, guests including Alan Shepherd’s daughter, Laura Churchley, enjoyed conversing with Russo, who also signed copies of the book that accompanies the exhibit.

Nearby, I couldn’t help but notice a lone exhibit case housing a battered old star-making device, recently recovered from a local school that turned out to be the original projector from the first planetarium shows at the “old chicken coop.”  Though a bit rusty and worn, it too spoke of creative impulses – the kind that start at the edges of our universe and reach deep down into the curiosity within each of us.   Carolyn, the Cosmosphere, and the chicken coop brought us together that night in a memorable and inspiring way.  Isn’t that what museums are supposed to do?

Kansas City – Jazz, BBQ and Beyond
Scroll to top