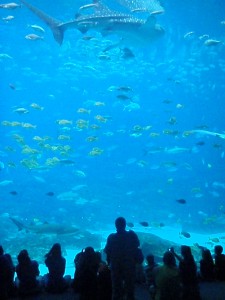 Whale Sharks, manta rays and 6 million gallons of water ( I  have seen 8 million quoted – either way it is ALOT of water!)combined with a 100 year old giant squid on loan from the Smithsonian’s National Museum of Natural History were just a few highlights from the first half hour of our tour of the Georgia Aquarium, one of our newest Affiliates and our first aqaurium partner.

To say the Georgia Aquarium is a destination is an understatement, just entering the parking lot one could tell that this was one of the most popular family spots in Atlanta.  We were greeted by Christie Cobb, Vice President of Development and Membership where we entered the world of fish and exotic sea creatures through the special event reception area – not your normal reception space to say the least but a room with a sprawling glass tank wall that allows guests to enjoy a private veiw of the Aquarium’s main exhibition, Ocean Voyager. From there our gracious hostess took us behind the scenes to the top  of the massive tank filled with more than 6 million gallons of  fresh water, more than 100,000 animals representing 500 + different species. Here, interns and students can be found observing the whale shark’s interactions with the other fish on research projects and lucky visitors who want to swim  in the tank prepare for their dive. The Aquarium  has an impressive closet full of dive gear in just about everyone’s size so even beginners can swim with the fish.

As we continued our tour we turned a corner in the hallway outside the dive gear area and were greeted by a team of penguins jumping around and playing! What a site too see!

The Georgia Aquarium has commited to be a world leader in promoting efforts to conserve aquatic wildlife. A group of researchers that includes scientists from the Aquarium are conducting worldwide studies and conservation efforts specifically on whale sharks – the world’s largest fish, in the Gulf of Mexico off the coast of Isla Holbox, Mexico. The initiative has uncovered the largest known aggregation of whale sharks and research is ongoing in collaboration with the government of Mexico.

For more information about the Georgia Aquarium visit  https://www.georgiaaquarium.org/ or make a visit in person!