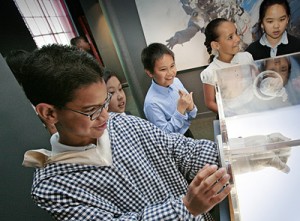 Students experience Textile Revolution: An Exploration through Space and Time, the permanent exhibition at the American Textile History Museum.

For the eighth consecutive year, Citizens Bank charitable foundation donated $25,000 to the African-American Museum in Philadelphia (Philadelphia, PA) in honor of Martin Luther King Day. The funding was used to underwrite the museum’s costs to offer free admission and cultural activities to more than 3,000 expected visitors.

The American Textile History Museum (Lowell, MA) has received a major gift of $1 million from the late G. Gordon Osborne and his wife, Marjorie, which will go towards the museum’s endowment fund.

The  Western Reserve Historical Society recently received a $407,000 grant from the Burton D. Morgan Foundation to work with its local school district to implement an entrepreneurial curriculum for 4th-6th graders. The 3-year program will be implemented this spring.

The Oklahoma Historical Society (Oklahoma City, OK) announced the Library of Congress in Washington, D.C. has selected The Daughter of Dawn as one of 25 films inducted to its 2013 National Film Registry, a collection of cinematic treasures that represent important cultural, artistic and historic achievements in filmmaking. The 80-minute, six-reel silent movie was shot during the summer of 1920 in Oklahoma’s Wichita Mountains Wildlife Refuge outside of Lawton.

Charlene Donchez-Mowers and the Historic Bethlehem Partnership (Bethlehem, PA) have been named the recipients of the seventh Tribute to Historic Preservation Award sponsored by the Sun Inn Preservation Association.

The board of governors of the Strategic Air and Space Museum (Ashland, NE) announced that Michael McGinnis has been appointed as the museum’s new Executive Director.

coming up in Affiliateland in February 2014
Scroll to top