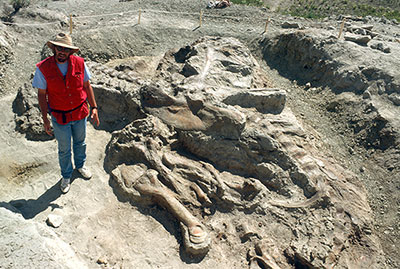 Jack Horner, Curator of Paleontology at the Museum of the Rockies, provides scale for Tyrannosaurus rex fossils at the excavation site near the Fort Peck Reservoir in Montana in June 1990. Named for its discoverer, Kathy Wankel, the Wankel T.rex is estimated to have weighed six to seven tons. Photo courtesy Museum of the Rockies.