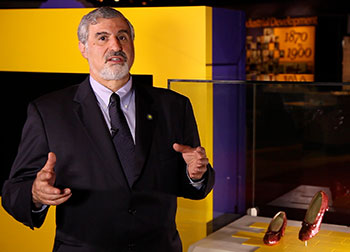 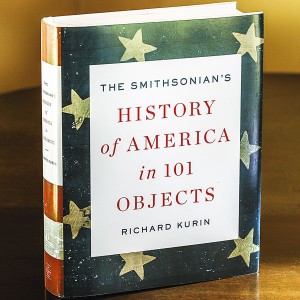 Ok, so we can’t actually send 101 artifacts on the road all the time, but we can send Smithsonian Under Secretary for Art, History, and Culture Richard Kurin! Aided by a team of top Smithsonian curators and scholars, Richard’s new book The Smithsonian’s History of America in 101 Objects, is a literary exhibition of objects from across the Smithsonian that together offer a marvelous new perspective on the history of the United States.

After the success of his book tours in Affiliateland–Madcap May: Mistress of Myth, Men, and Hope and Hope Diamond: The Legendary Story of a Cursed Gem–Richard is looking forward to visiting Affiliates again and sharing these fascinating stories from American history. 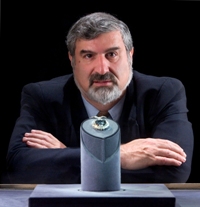 Richard traveled to more than 10 Affiliates during his book tour for “Hope Diamond: The Legendary History of a Cursed Gem.”

Ranging from the earliest years of the pre-Columbian continent to the digital age, and from the American Revolution to Vietnam, each entry pairs the fascinating history surrounding each object with the story of its creation or discovery and the place it has come to occupy in our national memory. He sheds remarkable new light on objects we think we know well, from Lincoln’s hat to Dorothy’s ruby slippers and Julia Child’s kitchen, including the often astonishing tales of how each made its way into the collections of the Smithsonian. Other objects will be eye-opening new discoveries for many, but no less evocative of the most poignant and important moments of the American experience. Some objects, such as Harriet Tubman’s hymnal, Sitting Bull’s ledger, Cesar Chavez’s union jacket, and the Enola Gay bomber, tell difficult stories from our nation’s history, and inspired controversies when exhibited at the Smithsonian. Others, from George Washington’s sword to the space shuttle Discovery, celebrate the richness and vitality of the American spirit. In his words, each object comes to life, providing a near-tactile connection to American history.

Publishers Weekly called it a “humanistic approach to storytelling (he even includes digressions on things that didn’t make it in, like the ubiquitous stuffed animal named after the first President Roosevelt: the Teddy Bear) which makes for immersive, addictive reading.”

Beautifully designed and illustrated with color photographs throughout, The Smithsonian’s History of America in 101 Objects is a rich and fascinating journey through America’s collective memory, and a beautiful object in its own right.

Interested in booking Richard for a speaking engagement and book signing at your organization? Contact your National Outreach Manager. Availability is February 2014- June 2014.

Interested in stocking your shelves with a great gift? Pre-order here!

coming up in affiliateland in october 2013

“Health is a Human Right” featuring images from the National Museum...
Scroll to top