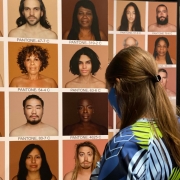 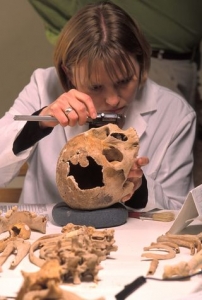 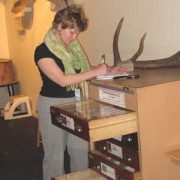 Twice a year, Affiliate staff members have the unique opportunity to work alongside SI experts for research and hands-on training through our Visiting Professional Program.  Affiliations was delighted to welcome  six Affiliate staff members for the fall 2009 and spring 2010 programs.  Here’s  a taste of what past visiting professionals experienced to inspire you to apply!

In October 2009, Katey Ahmann from the North Carolina State Museum of Natural Sciences spent a month working in the Smithsonian’s Office of Policy and Analysis where she conducted visitor evaluation studies at the National Postal Museum. She learned  strategies for interpreting the data through observation and discussions with other visiting residents.

Lee Goodan at the National Museum of Natural History

Also in the fall, Lee Goodan, from the Charlotte Museum of History, spent three-weeks working among four Smithsonian divisions–the Spark!Lab at the National Museum of American History (NMAH), Discovery Center at the National Museum of Natural History, the National Air & Space Museum, and Smithsonian Early Enrichment Center. Lee learned how young visitors were using exploratory spaces at the Smithsonian and how the educators were using the galleries in a larger educational context.   This will help Lee as the Charlotte Museum develops plans to create a new Hands-on History Room, an interactive area for early Pre-K students.

Eric Stanley (left) at the National Museum of American History.

Joining us in February 2009 from the Sonoma County Museum, Eric Stanley worked with the staff at NMAH to learn about the development, research, and design phases of exhibitions, as he looks forward to planning expanded history galleries at the museum. Eric said, “It was a tremendous opportunity to get a behind-the-scenes look and broad overview of a world-class history museum. I also cannot say enough about the individuals I met, the insights they shared, and the lasting connections I made. In addition to what I learned about exhibitions, I also came away with a richer sense of the possibilities that exist through the Affiliates program.”

Chena Popper in the Gems & Minerals department at NMNH.

Chena Popper, from the San Diego Natural History Museum just wrapped-up her visiting professional program in mid-April. Chena had the opportunity to work directly with the ten SI artifacts that are being loaned to her Museum for their All that Glitters: the Splendor & Science of Gems & Minerals exhibition opening May 15, 2010.    Working directly with experts at NMNH, Chena worked in the gem collection to help prepare the gems and jewelry which will be displayed at her Museum.  In addition to working directly with the artifacts, Chena also spent two-weeks in the registrar’s office at NMNH learning all the methods of care and registration for incoming and outgoing loans.

And starting soon, Juan Carlos Lopez, a curator from the Museo de Arte de Puerto Rico, will be researching collections across the Smithsonian that pertain to Puerto Rican and Latino fine art.  Supported by a grant from the Smithsonian Latino Initiatives Pool, Juan Carlos plans to develop an exhibition that explores the progression of Latin art from 1960- 1990, among other potential topics. Check back in the coming weeks as we blog about his experience!

As we closed out 2009, it’s nice to see some bright spots ringing in the New Year!  We’d like to acknowledge the following Affiliates for their hard work and success.

Museum of Arts and Sciences (Macon, Georgia) received a $10,000 grant from College Hill Corridor to hold “Art of the Hill” a spring break day camp.

Through state grants and local donations The Hermitage (Nashville, Tennessee) will begin a $1 million facelift to repair weather damage and wear and tear.

The Challenger Space Center (Peoria, Arizona) was awarded $50,000 from the Tohono O’odham Nation in September 2009 for a grant which will be primarily used for two new exhibits, the Gemini 8 and PlayMotion. The grant money will also help bring objects from the Smithsonian to the center for the Gemini 8 exhibit.

Joe B. Keiper has been named Executive Director of the Virginia Museum of Natural History (Martinsville, Virginia).

Three Smithsonian Affiliates were recipients of MetLife Foundation’s Museum and Community Connections program grants. The grants were awarded to 15 museums for exhibitions, artist residencies, and other programs that extend their reach into diverse communities.