The Institute of Museum and Library Services announced grant awards totaling $21,726,676 for museums across the nation to improve services to their communities including the following Affiliate projects:

Museum of History and Industry (Seattle, WA): $128,200 to conduct formative evaluation and community research to guide the redesign of its core exhibit, “True Northwest,” which traces the history of Seattle.

Denver Museum of Nature and Science (Denver, CO): $249,950 to redesign and expand its Space Odyssey exhibition with a renewed focus on inclusive and accessible informal learning opportunities.

Cincinnati Museum Center (Cincinnati, OH): $250,000 to develop a permanent exhibition to showcase its invertebrate paleontology collection and develop related educational programming that builds on a strong commitment to gender equity.

Ohio History Connection (Columbus, OH): $233,403 to continue its work to empower New Americans to become community leaders and advocates for their communities of origin. Originally funded through the IMLS Community Catalysts initiative, the project connects New American leaders with established community resources and fundamental civic education in order to build a base of knowledge that increases their sense of belonging in the larger metropolitan community.

Burke Museum of Natural History and Culture (Seattle, WA): $167,522 to rehouse a portion of its mycology and fish collections to secure their long-term preservation and to improve access for the benefit of researchers, students, government biologists, and citizen scientists.

Conner Prairie Interactive Historic Park (Fishers, IN): $104,500 to address institutional challenges relating to diversity, accessibility, equity, and inclusion (DEAI) and strengthen its relevance to the communities it serves by implementing policies, procedures, and training.

North Carolina Museum of Natural Sciences (Raleigh, NC): $105,085 to train staff members on the design and delivery of accessible content for its public programs and exhibits.

Conner Prairie Interactive History Park (Fishers, IN) received a $25,000 grant from the Duke Energy Foundation’s “Powerful Communities” program, to support conservation, habitat and forest restoration and other environmental initiatives. The funding will be used to provide White River shoreline stabilization and conduct a pond analysis in Hamilton County.

The Strategic Air Command and Aerospace Museum (Ashland, NE) received a grant of $2,000 from Humanities Nebraska to support an Apollo 11 50th Anniversary exhibit.

The PNM Resources Foundation awarded “reduce your use” grants totaling $100,000 to 21 New Mexico nonprofits, including the New Mexico Museum of Natural History & Science Foundation (Albuquerque, NM). The $5,000 grant will allow the organization to spend less on electric bills and more on providing essential services.

The Indiana Historical Society (Indianapolis, IN) was the recipient of the Best Practices Award from the Association of Midwest Museums. The award recognizes the Heritage Support Grants program for its support of regional historical societies, museums and sites across the state. Created in 2016 with support from a $3.48 million grant from Lilly Endowment Inc., the program provides grants and workshops to Indiana organizations, allowing them to raise the bar when caring for the state’s history. The grants help meet high-priority needs while workshops provide education on fundraising.

The Association of Science-Technology Centers awarded its first Leading Edge Overcomer Award to the American Museum of Science & Energy (Oak Ridge, TN) for the collaborative ways the Museum engaged its local community partners during a move into a new building with state-of-the-art exhibits.

Science Museum Oklahoma (Oklahoma City, OK) has been recognized with a 2019 Reader’s Choice Award as a top venue for special events in Oklahoma City by the publishers, editors and readers of ConventionSouth, a national multimedia resource for event planning. 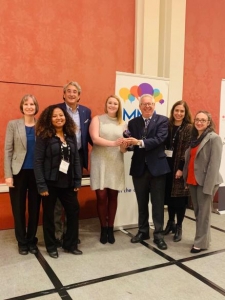 The Saint Louis Science Center (Saint Louis, MO) has hired Todd Bastean as its next president and CEO, effective October 7. Barbara Boyle, who has served as the center’s interim president and CEO for the past year, will resume her role as chief operating officer and chief financial officer.