In 1988, the Smithsonian Early Enrichment Center was founded, in part, to demonstrate the tremendous learning potential of museums on very young children, and to share those lessons as broadly as possible.  Dr. Sharon Shaffer, SEEC’s founding director, has grown the organization to three centers on the National Mall and an ambitious outreach program that has trained thousands of educators, including many Affiliates.  Sharon has made an indelible mark on the Smithsonian community, enriching our understanding of early childhood education.  She leaves big shoes to fill upon her retirement later this year.

In July, SEEC will welcome Dr. Kimberlee Kiehl, its new executive director.   Kim currently serves as Chief Strategy and Operations Officer and Senior Vice President for the Center of Science and Industry in Columbus, Ohio.  Of her many accomplishments at COSI, Kiehl was responsible for the physical and programmatic design of little kidspace®, a 12,000-square-foot “museum-within-a-museum” designed specifically for young children.  She has also been a faculty member at Ohio State University, teaching early childhood education and development courses, and running the University’s laboratory school for children under 6.  Kim earned her doctorate degree in education from Pennsylvania State University. 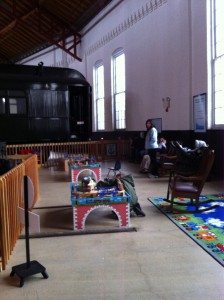 the new early childhood space at the B & O Railroad Museum

Affiliates have a long successful history of working with SEEC.  The B & O Railroad Museum in Baltimore consulted with SEEC when developing their dedicated spaces for early learners.  SEEC has conducted trainings and workshops for the Museum of Flight in Seattle, WA, the African American Museum in Philadelphia, the Ogden Museum of Southern Art in New Orleans, and the Ohr-O’Keefe Museum of Art in Biloxi, MS among others.  In January 2012, four Affiliate representatives from the California Science Center, the Rubin Museum of Art in New York City, the Museum of Nature and Science in Dallas and the Miami Science Center all came to Washington, D.C. to participate in a planning session for a National Symposium on Early Learning in Museums, currently under development.

We look forward to continuing the Affiliate-SEEC collaboration for the benefit of our museums’ youngest visitors, in thanking Sharon for the foundations she has laid, and welcoming Kim as a new partner in education.

Look for SEEC at the Resource Fair at the Smithsonian Affiliations National Conference, June 12-14.  And for more, check out the latest issue of the Journal of Museum Education, guest edited by Sharon Shaffer and focusing on early learning.

Innovation in Education at the 2012 Affiliations Conference

kudos Affiliates! may 2012
Scroll to top