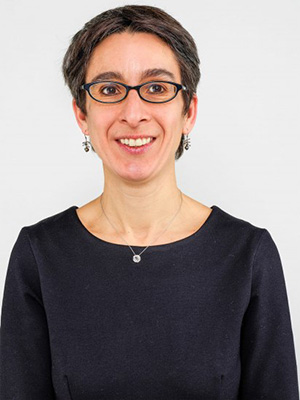 What do we love more than helping you navigate the Smithsonian? Sending someone from the Smithsonian to your neighborhood! Our people are our greatest resource and when new curators join the Smithsonian family, we like to share their stories with our network. This week, I had the chance to ask a few questions of Amanda Moniz, Curator of Philanthropy at the Smithsonian’s National Museum of American History, about her career. Read on to learn why she’s eager to share her passion with Affiliates. Interested in bringing a Smithsonian speaker to your organization? Contact your National Outreach Manager!

Tell us a little about yourself and how you got to the Smithsonian. What exactly is a curator of Philanthropy?

I’m an early American historian specializing in the history of philanthropy. My first book, From Empire to Humanity: The American Revolution and the Origins of Humanitarianism, explores how Americans and Britons rebuilt their relationships after the Revolutionary rupture through humanitarian collaboration and, in the process, transformed philanthropy.

Before I joined the staff of the Smithsonian, I worked at the National History Center of the American Historical Association. Its mission is to bring historical perspectives into public and policy conversations so that job provided great experience for this position with its emphasis on engaging the public in exploring history.

It has been a little over a year since you began at the Smithsonian. What have you enjoyed most about working at the National Museum of American History? And what are you looking forward to?

I love hearing people’s stories about giving. Most Americans give their time or resources in some way, shape, or form. I’ve talked with visitors, colleagues, well-known philanthropists, and people who work in nonprofits, and heard amazing stories about what giving and receiving has meant in their lives and their families’ lives. Their stories inspire me as I think about my work.

I’m really excited about building the philanthropy collection. A lot of people are initially surprised at the idea of exploring the history of giving through objects. I think the collection has the potential to open new perspectives on the role of philanthropy on the forming and re-forming of our nation.

So far, what is the most amazing artifact you’ve come across and why? What story does it tell?

I recently acquired a basically unknown portrait of Eliza Hamilton, the widow of Alexander Hamilton. She and other women founded a charity known as the Orphan Asylum Society of the City of New York in 1806 when women in the United States were new to organized benevolence. (The organization is still in existence and now known as Graham Windham. The painting was generously donated by Graham Windham.) The portrait was painted in the mid-1800s and shows her as an older woman. Her resolute look and direct gaze are captivating. I also love the portrait because it helps us tell the story of the emergence and development of women’s philanthropy.

How does one collect philanthropy?

The history of philanthropy is the story of people mobilizing resources (of time, talent, and treasure) to support causes and institutions in hopes of having an impact. I’m looking for artifacts that help us understand the various dimensions of those developments from a range of perspectives.

The first object I collected was a nest box used in bluebird conservation. Nest boxes provide habitats for bluebirds and have helped revive the populations of the bird, which had fallen because development had disrupted the birds’ habitats. The nest box is a great object because it helps to effect the change bluebird conservation advocates are pursuing.

You’ve mentioned that sharing is “perhaps the most fun part of a curator’s job.” We have Affiliates in 46 states, Puerto Rico, and Panama and we are always looking for ways to share Smithsonian resources with them. What would you like to share with them?

I’d love to let our Affiliates know about some of our online resources.

Later in March, we’ll be adding a section on “Giving and the Arts” to the online version of Giving in America. (“Giving and the Arts” will replace the case on environmental philanthropy in the physical exhibition on March 22.) In addition to the online exhibition, we have a website for the Smithsonian’s Philanthropy Initiative with videos, links to blog posts, and more. We also have robust social media focused on philanthropy, and I hope folks will join the conversation. I love sharing what I’m learning and am eager to learn from others!

BONUS: Read Amanda’s blog from April 2017 shortly after she joined our Smithsonian family.