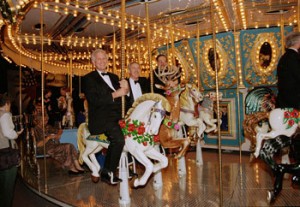 Join your Affiliate and Smithsonian colleagues at the Smithsonian Affiliations National Conference, June 12- 14, 2012!

If you haven’t already marked your calendars, now is an even better time to do so. This year’s final event during the National Conference is a special program and reception on June 14 honoring the late I. Michael Heyman, 10th Secretary of the Smithsonian Institution.

Heyman served as Smithsonian Secretary from 1994 to 1999. Seeking to extend the Institution’s reach far beyond the nation’s capital, he created the Smithsonian Affiliations program to share resources with other museums. Among the highlights of Heyman’s tenure was the Institution’s first website in 1995 and the Smithsonian’s 150th anniversary celebration in 1996. He also oversaw the establishment of the Smithsonian Latino Center in 1997 and, under his leadership, the Steven F. Udvar-Hazy Center donation was secured for the creation of a new facility for the National Air and Space Museum. Shortly before his retirement in 1999, Heyman officiated at the groundbreaking for the National Museum of the American Indian.

There’s much more in store for you at this year’s Affiliations Conference! We’re developing a schedule packed with education initiatives, funding resources, special speakers and networking opportunities. To register, book a hotel room, and get updated on the latest Conference events, click here.

The Smithsonian Affiliations National Conference is for current Affiliates only. If you are interested in becoming an Affiliate, or have an application in progress and would like to attend the Conference, please contact Elizabeth Bugbee for more information.