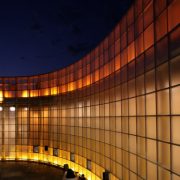 There is so much going on at Smithsonian Affiliates in and around Seattle that one can hardly sleep.  Of course being in the heart of America’s coffee capital only adds to this condition.

Entrance to the Museum of Flight

This trip started on November 12 at the Museum of Flight, a sparkling and sprawling Affiliate, just south of the city, appropriately recognized as the world’s largest private not-for-profit air and space museum.  Under the dynamic leadership of Bonnie Dunbar, five-time space shuttle astronaut, the museum hosts such remarkables as the first Boeing 747, Air Force One, and a supersonic Concorde.  Astronaut John Young’s spacesuit and various examples of space food, on loan from the National Air and Space Museum (NASM), are also on display in the main building.  I was pleased to run into Dan Hagedorn, formerly of NASM and now senior curator at the museum. Dan’s voluminous knowledge of aircraft and aviation history kept me spellbound for hours. I think of Dan as our permanent loan to the museum.  He is complemented by an enthusiastic set of colleagues who, like the pioneers of flight, are continually dreaming up new ways to expand the museum’s innovative exhibitions and education programs.  Soar on!

A striking installation at the Wing Luke Asian Museum

The Wing Luke Asian Museum, in the heart of Seattle’s International District, flies to the heart of Seattle’s complex history as a home for generations of Asian and Pacific Island Americans.  The small community museum led for many years by visionary Ron Chew, and now directed by the equally inspiring Beth Takekawa, recently reopened around the corner in a not so small historic building, brilliantly transformed by the architectural firm Olson Sundberg Kundig Allen.  The renovation allows for contemporary art and community culture displays while preserving the original spaces occupied by workers, family associations, and merchants.  On view at this time are Roger Shimomura’s provocative and disturbing  “yellow terror” artifacts and his paintings that explore and expose the cruelty and harm of stereotyping.

About ninety miles up the coast, in Bellingham, Washington stands the Whatcom Museum of History and Art, an important repository of Northwest  history and culture, and the ultimate destination of this trip. On November 13 the Whatcom celebrated the opening of it new “Lightcatcher” building, an exquisite facility, also designed by Olson Sundberg Kundig Allen Architects, that will rehouse the museum’s art collection and showcase new collections and acquisitions.  It was an honor to join director Patricia Leach, Mayor Dan Pike, the Board and all the local supporters in applauding this great community accomplishment. Bellingham was famous as the jumping off point for the great Alaska gold rush, but the hard work of many in this city, has unearthed the local gold of good will and artistic creativity.  We are delighted that the Smithsonian American Art Museum‘s very relevant exhibition, 1934: A New Deal for the Arts, will be the featured jewel at the Whatcom in 2010.

Smithsonian Affiliates in Seattle and Bellingham offer so many amazing opportunities for learning and discovery, that what I lacked for in sleep I made up for in inspiration.  Pour me another cup of coffee!