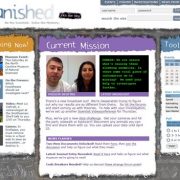 Helping the Smithsonian solve a mystery about a fictitious environmental disaster – doesn’t that sound like fun? 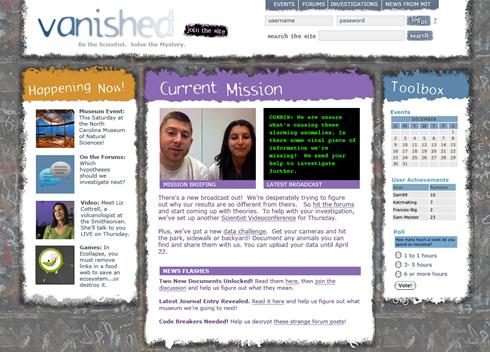 A preview look at the Vanished site, a curated alternate-reality game

Smithsonian scientists have teamed up with MIT’s Education Arcade to engage middle-school students to do just that, in an online alternate-reality game.   Vanished will kick off on April 4 at vanished.mit.edu.  In the course of 8 weeks, students ages 11-14 from all over the country will collect clues on- and off-line, and form a scientific community to help Smithsonian scientists test hypotheses and solve this mystery.  Thanks to the Smithsonian Center for Education and Museum Studies, a range of scientists from entomologists to paleontologists will host videoconference sessions with players, mentoring them through their scientific discoveries.  (Read more in this USA Today article.)

Where will students collect the real data from their hometowns, to share with Smithsonian scientists?  Many will look to their local Affiliate for clues.  According to MIT game designer Caitlin Feeley, “a kid in Kansas could go to the Kansas Cosmosphere in Hutchinson and bring back information on space exploration, and a kid in North Carolina could go to the Museum of Natural Sciences in Raleigh, walk through their incredible diorama, and bring back information on how a lost species massively affected an entire ecosystem.”  In fact, 17 Affiliate museums are partnering with the Smithsonian and MIT to offer clue-gathering opportunities for gamers.  “The Aerospace Museum of California is excited to partner with the Smithsonian and MIT in this unique educational opportunity,” says Linda Payne, the Museum’s Education Director.  “We are certain that Vanished will stimulate students’ interest in scientific exploration and problem solving.”

The game, made possible by a grant from the National Science Foundation, hopes to capitalize on the popularity of shows such as CSI to offer a specific kind of scientific problem-solving for students.  “The kids are actually doing science,” says Elizabeth Cottrell, Smithsonian geologist and director of the Smithsonian’s global volcanism program.  “They are going to have the â€˜Ah, I get it,”. moment for themselves.”

Thanks to the Smithsonian Affiliates who will help students find those “Ah hah” moments… right in their own neighborhoods.