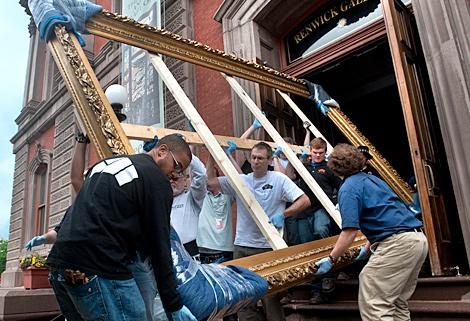 A masterpiece by one of America’s most renowned 19th-century landscape artists will soon make its way west from the Smithsonian American Art Museum in Washington, D.C., to the Buffalo Bill Historical Center in Cody, the only Smithsonian Affiliate in Wyoming.

Thomas Moran’s The Grand Canyon of the Yellowstone (1893 – 1901) will be on loan from the Smithsonian American Art Museum as part of the Whitney Gallery of Western Art’s 50th Anniversary celebration. The massive painting–more than eight feet high and fourteen feet long–arrives in early summer for a four-month stay and will be unveiled June 21.

“This is truly a glorious, iconic painting of Yellowstone that first appeared in Chicago at the 1893 Columbian Exposition,” says Alan Simpson, former U.S. Senator from Wyoming and the historical center’s chairman of the board of trustees. “What a rare and extraordinary privilege for our visitors to connect with Thomas â€˜Yellowstone’ Moran’s Grand Canyon of the Yellowstone and then to see the landscape that inspired it as they travel in Yellowstone.”

Indeed, Moran (1837 – 1926) is often considered the pivotal figure in efforts to make Yellowstone a national park. In 1871, he accompanied F.V. Hayden’s geological survey of the area as guest artist and worked closely with photographer William H. Jackson. Ostensibly, Moran painted the extraordinary sights of Yellowstone, and Jackson’s images proved they existed–in case there was any question about Moran’s interpretation.

The renovated gallery opens June 21, 2009. Grand Canyon of the Yellowstone will be on view through October 31, 2009.  Follow the countdown toward the opening of the Whitney Gallery of Western Art by visiting the historical Web site at www.bbhc.org/wgwa.  For more images from the Smithsonian American Art Museum’s flickr stream, click here.

“An Open Smithsonian, all around”