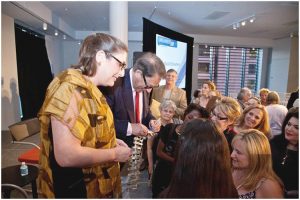 National Museum of American Jewish History CEO Ivy Barsky looks on as shoe designer Stuart Weitzman autographs one of his gladiator sandals for a woman who attended his talk at the museum. Photo courtesy of Matthew Christopher Photography

The Covenant Foundation has given the National Museum of American Jewish History  (Philadelphia, PA) a $50,000 grant for the development of a national curriculum on the American Jewish experience. The grant also will go toward professional development opportunities for educators teaching American Jewish history.  In addition, the museum received a major $1 million gift from the family of renowned shoe designer and entrepreneur Stuart Weitzman. In recognition of this gift, the Museum’s “First Families” gallery, which explores the lives of early Jewish settlers in colonial America, will be named in honor of his family.

Framingham State University (Framingham, MA) has received a $1.5-million grant from the U.S. Department of Education to train 50 area teachers on teaching students English as a second language.
Also, Framingham State University received a $10,000 state grant to support students in Framingham and Milford Public Schools who may be eligible for early college programs. The program is geared toward “underrepresented’’ students – typically those who are low-income or first-generation college students.

The Pinhead Institute (Telluride, CO) received a Community Support grant for $7,660 from The Commission for Community Assistance, Arts and Special Events . The grant will fund their internship program as well as for Scholars in the Schools, their summer Punk Science talks and also some teacher training.

The Maine Office of Tourism awarded Abbe Museum (Bar Harbor, ME) a $60,000 Special Event Grant. The funding will support a new event that brings national and international attention to Maine’s Native American basket makers and artisans. The event will take place in May 2018.

The State of Ohio has awarded $250,000 for improvements to the Springfield Museum of Art (Springfield, OH) in its most recent budget.

The Old Governor’s Mansion (Milledgeville, GA) was selected as the “Institution of the Year” by the Georgia Association of Museums and Galleries, the state’s museum professional group. The Old Governor’s Mansion was recognized to be an institution of statewide significance that through programming, exhibition and resource development has ensured the thoughtful and relevant interpretation of a critical period in the history of Georgia and America.

Union Station, Kansas City (Kansas City, MO) won a Grand Award in the Special Projects category from the Missouri chapter of the American Council of Engineering Companies for The Union Station of Kansas City Westward Expansion Project, a project designed and built by Burns & McDonnell.