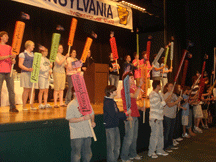 Affiliates are bursting into spring with impressive awards and recognition.

The National Civil War Museum (Harrisburg, PA) has received a $30,000 grant from the Kunkle-Rutherford Foundation to pay for upgrades to the museum’s galleries audio system.

The George Gund Foundation awarded a $150,000 grant to the Western Reserve Historical Society (Cleveland, OH) for the restoration and installation of the Euclid Beach Carousel at its University Circle facility.

Thanks to a $2,000 grant from the Wisconsin Humanities Council, the Wisconsin Maritime Museum (Manitowoc, WI) will create four new guides on the Manitowoc River, focusing on a different facet of the river and its heritage.

Drumming at the Musical Instrument Museum in Phoenix.

As part of a marketing campaign planned for this spring, the Nebraska Tourism Commission surveyed Nebraskans and non-Nebraskans alike on what Nebraska attractions and events are the most iconic. The Strategic Air & Space Museum (Ashland, NE) came in at #7 and was the only state museum in the top-10.

Peter Aucella, assistant superintendent of Lowell National Historical Park (Lowell, MA) is the 2014 recipient of the Kiwanis Club of Greater Lowell’s Thomas G. Kelakos Community Spirit Award, which recognizes people who give back to the community.

The Abbe Museum (Bar Harbor, ME) received the 2014 Maine Office of Tourism Leadership and Growth Award.

The Army Heritage Center Foundation (Carlisle, PA) announced that its education director, Jeff Hawks, will receive the Adler Friend of Education Award from the Pennsylvania State Education Association for his work as state coordinator for National History Day in Pennsylvania.

The Building Museums Symposium selected the Museum of History and Industry (Seattle, WA) as one of two museums to be awarded the 2014 Building Museums “Buildy” Award in recognition of their exemplary accomplishment in leading their institution through the challenging process of creating new museum space. The museum converted an historic Naval Armory building into museum space, while retaining the architectural integrity of the historic landmark.

The Antique Automobile Club of America Museum (AACAM in Hershey, PA) was recently awarded five NAMMY awards, bestowed by the National Association of Automobile Museums (NAAM) at their annual conference in California last week.  AACAM took home first place awards for Events & Public Promotion, Collateral Materials, and Interpretative Exhibits; and third place awards for Newsletters and Magazines, and Websites.  Mark Lizewskie, Executive Director of the AACAM, was also elected to the NAAM Board of Directors.

affiliates in the news!
Scroll to top