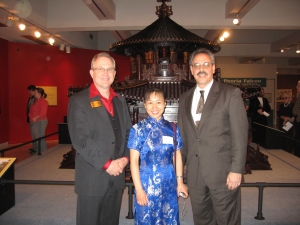 The director of the Peoria Riverfront Museum, community leader, and Affiliations Director Emeritus Harold Closter stand in front of the Ten Thousand Springs Pavilion at its debut opening in Illinois in 2008.

During the Affiliations annual conference in 2007, an Affiliate director marveled at a red sandalwood carving on display in the Ripley Center on the Smithsonian’s campus. The structure was one-fifth scale model of the celebrated and intricate classical Chinese pavilion that stands within the Forbidden City in the heart of Beijing, the Ten Thousand Springs Pavilion.

The director of Lakeview Museum (now Peoria Riverfront Museum in Illinois) had been exploring ways to connect with the local Chinese community and inquired about the availability of the exhibition. After a series of conversations with staff from the Smithsonian’s Museum Conservation Institute, the exhibition was approved for travel. This simple inquiry sparked a national tour that reached several Affiliate communities and connected with thousands of visitors.

What is the Ten Thousand Springs Pavilion exactly? Made by Chinese artisans using traditional Chinese carving and fine furniture techniques, the model captures the beauty of the original pavilion, and is an outstanding example of traditional Chinese carving. Artisans at the China Red Sandalwood Museum constructed the model of red sandalwood, treasured for its dark glossy color and musty floral fragrance. No nails are used; the entire structure is put together with mortise-and-tenon joinery. The China Red Sandalwood Museum in Beijing donated the model to the Smithsonian. 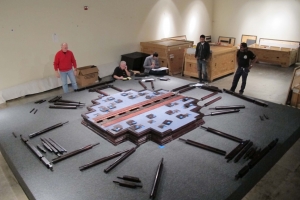 The Pavilion’s thousands of pieces are unpacked from customized crates and laid out prior to assembly.

Obviously, the Pavilion was no ordinary exhibition. The model contains 3,000 individual pieces packed into special crates constructed specifically to fit each piece into its own slot. Design and installation advice was provided in both English and Mandarin, and the Smithsonian provided files of photo murals and bilingual labels for Affiliates’ use.

Still, the Pavilion’s specialized construction and installation required specialized expertise. In another stroke of collaboration serendipity, the former senior furniture conservator at the Museum Conservation Institute, Don Williams, was available to travel to Affiliate sites to both assemble and dissemble the Pavilion. In whichever Affiliate city Don traveled, he recruited volunteers from the “Professional Refinishers Group” from across the country to travel to Affiliate cities to assist with the installation. 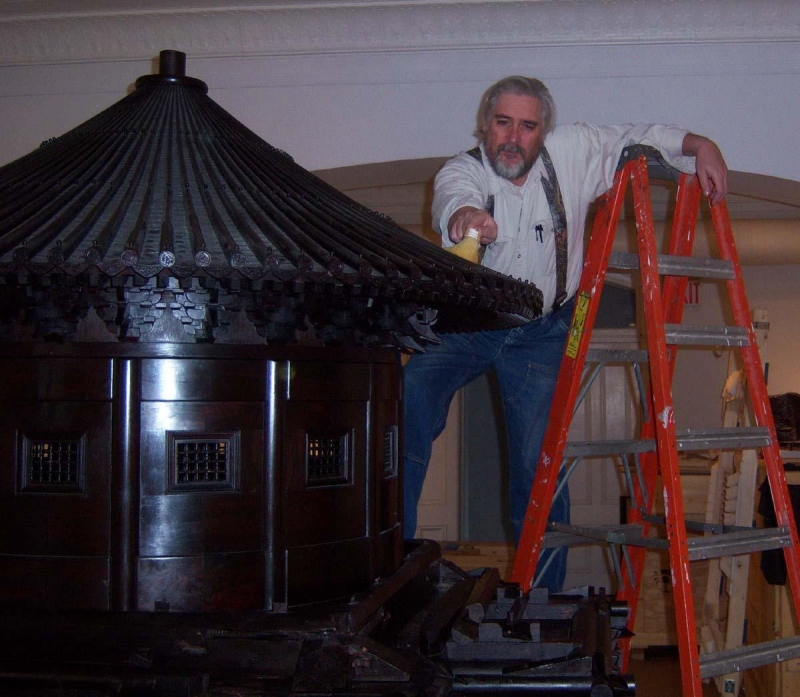 Senior Smithsonian furniture conservator Don Williams accompanied the Pavilion to all of its stops, overseeing installation and deinstallation. 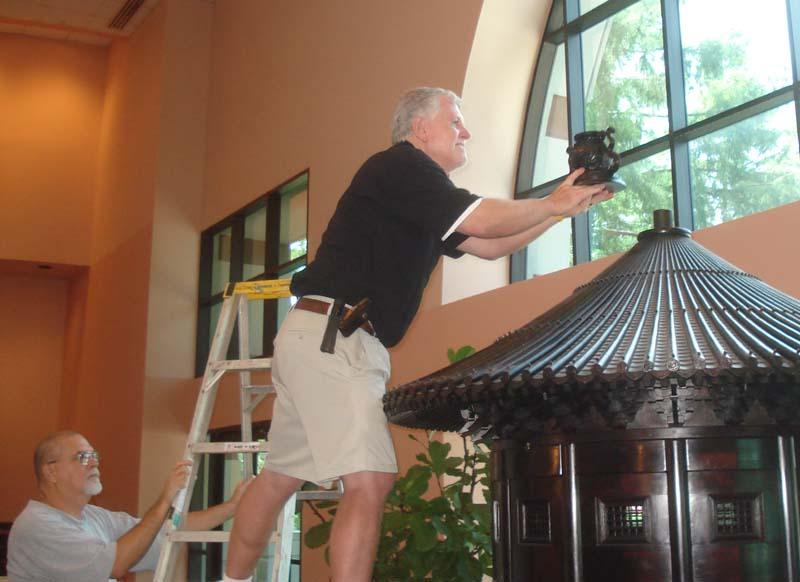 A volunteer expert carefully places the crowning decoration atop the Pavilion.

The Pavilion traveled to five Affiliates between 2008-2013. Its tour after Peoria included the International Museum of Arts and Sciences in McAllen and the Irving Arts Center in Irving, TX; Flushing Town Hall in Queens, New York; and the Headley-Whitney Museum, a former Affiliate in Lexington, KY;. 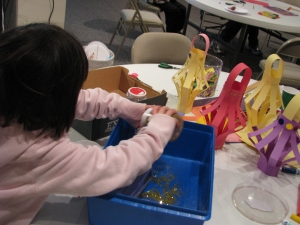 Crafting Chinese lanterns was one of the many educational programs that Affiliates created to celebrate the Pavilion in their cities.

In every city that hosted the Pavilion, the Affiliate was able to craft significant and meaningful outreach to its Chinese community. Programming included traditional Chinese art workshops such as calligraphy and tea ceremony, as well as presentations on tai chi, traditional medicine, folklore and opera. For the Pavilion’s opening ceremonies, Affiliates invited the Chinese diplomats from their cities, and featured traditional dance troupes. Community relationships forged as a result of the Pavilion flourish still.

While in Flushing Queens, our collaboration saw yet another instance of serendipity. Volunteers assembled at Flushing Town Hall to unpack the Pavilion a day before Don Williams was able to arrive. They had some trouble deciphering the unpacking directions. Flushing Town Hall sits in the center of one of the largest Chinese immigrant communities in America, so a staff member suggested they seek the help of a local resident. A waiter from a nearby restaurant was recruited to translate the instructions from Mandarin so the team could lay out all the pieces to be ready when Don arrived.

Such is the magic—and impact—of Smithsonian and Affiliate collaborations. 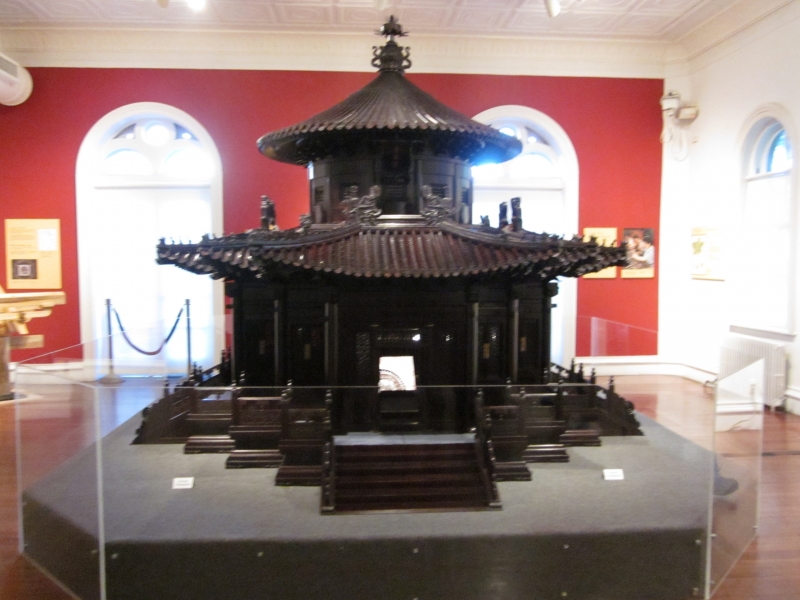 The beautifully completed Ten Thousand Springs Pavilion in Flushing, New York (thanks in part to a waiter in a Chinese restaurant near the gallery!)