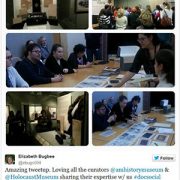 And museums are using them in new and unique ways to raise money and engage new audiences. In 2013, the Freer|Sackler Gallery launched its first major crowdfunding campaign “Together we’re one” to support Yoga: The Art of Transformation. Using crowdfunding, the museum asked ordinary citizens to help fund the exhibit. In the end, the museum raised more than $170,000, well above its goal. 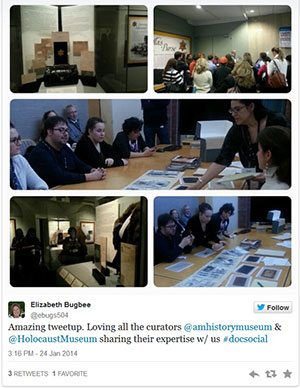 At the National Museum of American History, National Air and Space Museum and National Museum of Natural History social media practitioners are engaging new audiences in person and online by hosting Tweetups (sometimes called socials) for enthusiasts who want to learn more about Smithsonian collections, programs and exhibits. Partnering with other organizations like NASA and the National Holocaust Museum, the Smithsonian reaches new audiences through the personal tweets from their most avid audiences. During the #docsocial tweetup in January 2014, the small event–about 25 tweeps–resulted in almost 24 million impressions on Twitter. (Impressions are similar to newspaper delivery–you know how many newspapers were delivered but not how many were read, but the potential is there!)

As we plan our 2014 Affiliations National Conference, we want to know who among our amazing Affiliate network have had successes in crowdfunding and tweetups? We’re planning two sessions during our conference about both topics and would love to include Affiliate insights. Have you funded a program or exhibit through online giving? Have you expanded your reach using Tweetups as a tool? We want to know. And if you’re one of our amazing Affiliate innovators, we want to include you in our conference. Email Elizabeth Bugbee to share your successes (and failures too!).

In addition, we’ve started a Social Media @SIAffiliates Facebook group. We want to create a community for our Affiliate network to get to know each other and share ideas with each other. Please join today!