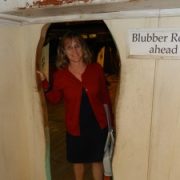 This summer I had an opportunity to experience American history from an interesting perspective – on the water.  My travels took me to three Affiliates whose ships – actual, life-size, working ships – punctuate important moments in our history.   The Mayflower II, the USS Constitution, and the Charles W. Morgan all illustrate the crucial contributions of “sailors” (of all types) to our nation’s success.

“Being thus arrived in a good harbor and brought safe to land, [we] fell upon [our] knees and blessed the God of Heaven who had brought [us] over the vast and furious ocean.”   Especially today, a visitor to the Mayflower II can still deeply appreciate these words by the Plymouth colony’s first governor, William Bradford.  The magnitude of this bravery is inspiring to imagine. 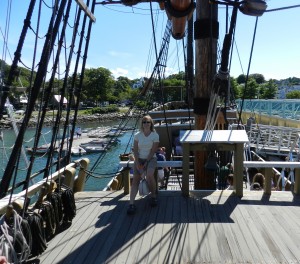 On one of the upper decks of the Mayflower II, in Plymouth harbor.

The Mayflower II is a faithful reproduction of the original, historic ship that brought the Pilgrims to the coast of Massachusetts in November 1620 (and was given to the United States by the British in 1957).  Exploring the decks of the ship and its cramped quarters, it’s easy to imagine the fears and anxieties of its 102 passengers, including 3 pregnant women, who lived there for over ten weeks.  Also on board were all the food, clothing, furniture, tools and other items they would need to start a life in a foreign land.

The travails of such a voyage and the biographies of its passengers are fascinating.  But the interpreters’ discussion of the Mayflower Compact is equally inspirational.  After the tumultuous voyage and a protracted start to finding an anchoring spot on Cape Cod, the community on board collectively decided to delay disembarking until they had a self-governing treaty in place.  That act, and their subsequent diplomacy with the indigenous Wampanoag, reveal the very early beginnings of what American democracy would look like, both in its best and worst incarnations.

Plimoth Plantation, Smithsonian Affiliate, does a great job of telling both sides of this story in all of its sites – from the ship to the Wampanoag Homesite and the English Village.  What I quickly realized is that the Pilgrim story is much more complex than the one we celebrate at Thanksgiving, and well worth delving in deeper to appreciate.

“Huzzah! her sides are made of iron!”  Up north in Boston, I toured the USS Constitution.  Most know her by her nickname, Old Ironsides, based on this exclamation by one of her sailors.  The ship sits in the Charlestown Navy Yard next door to Smithsonian Affiliate, the USS Constitution Museum. 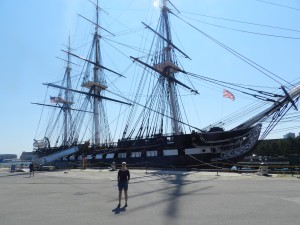 Ready to go onboard the USS Constitution, in Boston’s Charlestown Navy Yard

Most importantly, she is undefeated.  The USS Constitution fought in several wars, most famously in the War of 1812.  That war, often called the Second War of Independence, definitively established the power and resolve of our new nation.  The celebrated victories of the USS Constitution incarnated that resolve.  She is most famous for her victory over the HMS Guerriere in July 1812, when the British ship’s 18-pound iron cannonballs, shot at close range, “bounced” off her sides.  (Her hull is not, in fact, made of iron, but of oak.)  The battle was over in 35 minutes.

Touring the ship is amazing, but it’s in the museum where the story gets really unpacked.  Here, you come to understand what life was like on the ship – how much sailors were paid, what they ate and wore.  You can even try out how they slept, on hammocks only inches apart from one another.  Being there this summer as the museum commemorates the 200th anniversary of that fateful victory was especially moving, another reminder of the bravery and sacrifice of our military that solidified the foundation of our nation.

The Morgan is the crown jewel of the Seaport’s collection, America’s last surviving wooden whaleship, and a designated National Historic Landmark since 1966.  Built in 1841, she made 37 voyages in her 80 years of service, surviving countless hazards of the sea such as ocean storms, Arctic ice, and even, a cannibal attack.

But why is a whaleship so important to American history?  Before kerosene and petroleum were discovered later in the 19th century, whale oil (and other byproducts) were  the primary commodity used for illumination and lubrication.  Think about that – American lighthouses, lamps, candles, street lights, and industry machines were all powered by whale oil, and kept our economy moving forward.  As Herman Melville said in the great whaling novel Moby Dick, it was considered “as rare as the milk of queens.” 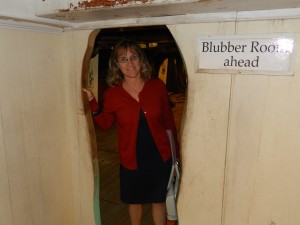 Checking out the Morgan’s blubber room.

Her effect on our economy is not the only important story.  The Morgan literally sailed all over the world, and attracted an incredibly diverse global crew who eventually became U.S. citizens.  The ship is the last surviving reminder of a major international economic force, but also, a living piece of history that tells great stories of adventure, hardship and immigration.

All three of these amazing ships still sail.  All three have been, or will be, on the water again – the Mayflower II at its 50th anniversary in 2007, the USS Constitution this summer to commemorate its 200th anniversary victory, and next summer, the Morgan will embark on her 38th voyage to the New England ports she visited decades ago.

So here’s to the ships, their passengers and crews, that so bravely shaped our history.  Huzzah!