It’s the Friday before Thanksgiving break. We’re all excited about seeing friends and family and taking a little break from school and work. So here are a few ideas for including the Smithsonian in your holiday plans from our Affiliate partners across the country:

The Lizzadro Museum of Lapidary Art in Elmhurt, Illinois, hosts Modern Designer Jewelry from the Smithsonian, an exhibition that features jewelry from American Jewelry designers from 1960 to 2009 from the collections of the National Museum of Natural History.

Take an in-depth look at Pennsylvania’s significant role during the Civil War at the Senator John Heinz History Center in Pittsburgh. In its new major exhibition, Pennsylvania’s Civil War, you can find a tintype camera and portable printing press on loan from the National Museum of American History. 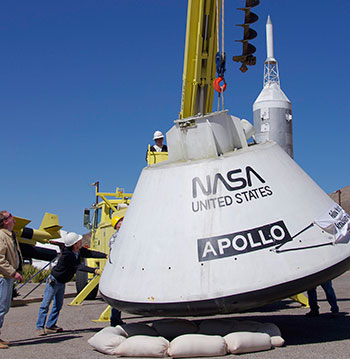 Apollo Boilerplate Command Module on loan from the National Air and Space Museum.

More than 21 artifacts on loan from the National Air and Space Museum are on view at the New Mexico Museum of Space History in Alamagordo. Get an up-close look at an Apollo Boilerplate Command Module and see the training coveralls worn by New Mexico astronaut, Harrison Schmitt, the only scientist to walk on the moon.

If you’re in San Antonio, the Institute of Texan Cultures is currently displaying two exhibitions from the National Museum of the American Indian and organized for travel by the Smithsonian Institution Traveling Exhibition Service (SITES). Native Words, Native Warriors tells the story of soldiers from more than a dozen tribes who used their Native languages while in service in the U.S. military. Ramp It Up: Skateboard Culture in Native America celebrates the vibrancy, creativity and history of American Indian skateboarding culture.

It wouldn’t be Thanksgiving without the rich tradition of gathering together at harvest time and celebrating the abundant joys of the season. At Plimoth Plantation in Plymouth, Massachusetts, visitors can learn all about the settlement of the Plymouth Colony in the 17th century.

The Polk Museum of Art in Lakeland, Florida, includes five works of art from the National Air and Space Museum collection in its exhibition Paintings of the Space Age.

Arizona State Museum, in Tucson, celebrates the creative work of American Indian directors, producers, writers, and actors during the Native Eyes Film Showcase, in collaboration with the National Museum of the American Indian and many others.

Is the Smithsonian in your neighborhood? Find an Affiliate here.