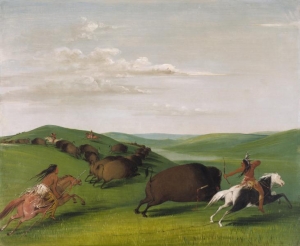 D. C.
Affiliate participants in the Will to Adorn project from the Museum of the African Diaspora (San Francisco) and the Institute of Texan Cultures (San Antonio) will discuss their work with students as part of the Youth Access Grant Forum in Washington on 3.1.

Curator Leslie Przybylek from the Heinz History Center (Pittsburgh) will be a panelist in the program  Innovative Lives: How Women Shaped the Alcohol Industry at the National Museum of American History, 3.16.

PENNSYLVANIA
The African American Museum in Philadelphia  will screen the Smithsonian Channel program  The Lost Tapes: Malcolm X in Philadelphia, 3.1. 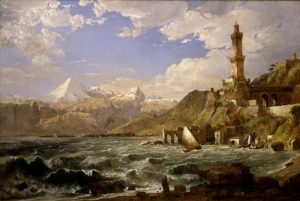 Jasper Francis Cropsey, The Coast of Genoa, 1854, oil on canvas, Smithsonian American Art Museum, Gift of Aileen B. Train, Helen B. Spaulding and Julia B. Key

FLORIDA
The Polk Museum of Art will exhibit Jasper Cropsey’s The Coast of Genoa, a painting on loan from the Smithsonian American Art Museum, in Lakeland, starting 3.3.

CONNECTICUT
The Connecticut Historical Society will host a lecture and book signing by Dr. Richard Kurin on The Smithsonian’s History of America in 101 Objects in Hartford, 3.5.

KENTUCKY
The Frazier History Museum will host an exhibition on The Magnificent Mona Bismarck, who donated fashion collections to the National Museum of American History, opening in Louisville, 3.15.

NEW YORK
The Rockwell Museum will host a talk by curator Matilda McQuaid of the Cooper Hewitt Smithsonian Design Museum as part of their Art + Science lecture series in Corning, 3.22.

WASHINGTON
The Wing Luke Museum of the Asian Pacific American Experience will host a workshop entitled  Teacher Creativity Studios: APA Cultural Presence in the Classroom in collaboration with the Smithsonian’s Center for Learning and Digital Access in Seattle, 3.24. 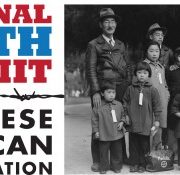 Smithsonian Affiliations welcomes staff from Affiliate organizations at a reception celebrating our 20th Anniversary on the first day of the American Alliance of Museums Annual Meeting, 5.26

The Mennello Museum of American Art opens Pop Art Prints, an exhibition of 37 items from the Smithsonian American Art Museum. The installation includes works from the 1960s by Robert Indiana, Jasper Johns, Roy Lichtenstein, Claes Oldenburg, Robert Rauschenberg, and others. The installation is part of a series that highlights objects from the collection that are rarely on public view, opening 5.6.

Missouri
Last chance to see Above and Beyond at the Saint Louis Science Center. The exhibition celebrates the power of innovation to make dreams take flight and features two artifacts from the National Air and Space Museum. The exhibition closes 5.8.

Ohio
The Ohio History Connection will host a videoconference featuring Dr. Jeremy Kinney, curator at the National Air and Space Museum.  The videoconference will connect NASM with the Ohio History Connection and Stone Gardens Assisted Living Complex near Cleveland. Kinney will discuss the Enola Gay and its restoration while a curator from OHC will address the Ohio connections to the plane, 5.19.

Virginia
Last chance to see two of George Washington’s battle swords together for the first time in over 200 years. One sword is on loan to George Washington’s Mount Vernon Estate and Gardens from the National Museum of American History. Exhibit closes 5.30. 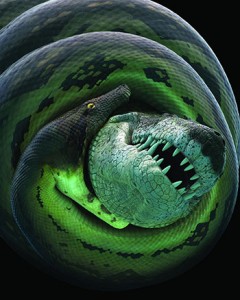 Idaho
There’s still time to see Titanoboa: Monster Snake at the Idaho Museum of Natural History, an exhibition organized by the Smithsonian Institution Traveling Exhibition Service. On view through 6.12.