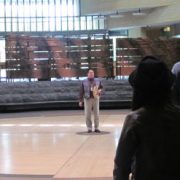 I met Dennis Zotigh (Kiowa/Ohkay Owingeh/Santee Dakota), museum cultural specialist at the National Museum of the American Indian (NMAI), after he had finished a short performance in the rotunda at the museum. He had begun softly beating the drum and as it grew louder, heads appeared over the railings three floors up and visitors gathered from all over the museum. 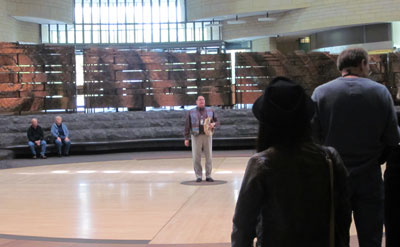 Dennis Zotigh at the National Museum of the American Indian.

“There’s a technique in this.  It’s more than an instrument. It’s an embodiment of the human spirit and it speaks from spirit to spirit.  There is a natural progression that is not evident unless you know it’s happening,” said Zotigh. “I start very low and the louder it gets, people back up and a natural circle is made around the instrument drawing people all over to gather in the circle.”

People in mid-conversation, couples arguing, and even children playing in the hallway naturally stopped to focus on his drumming. “It’s soothing. It speaks to them. And for just a few moments, they leave their problems. The drum is more than just an aesthetic piece. It’s an embodiment of the heartbeat of the Indian culture,” said Zotigh after the performance.

Most days you can find Zotigh in the hallways and galleries at NMAI where he’s engaging with visitors and teaching them about Native American culture. He’s been asked everything from the most basic to the most scholarly of questions and is eager to share his knowledge with anyone.  A performer all his life, Zotigh has traveled all over the world performing for multicultural audiences and oftentimes introducing them to something they’ve never been aware of before. 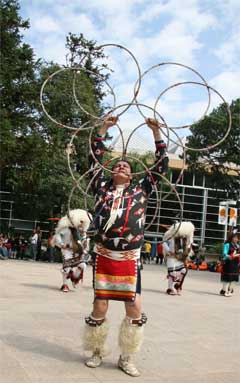 This November you can find Zotigh at The Charlotte Museum of History (CMH), a Smithsonian Affiliate in Charlotte, North Carolina, where he’ll be participating in the 3rd Annual American Indian Heritage Month Celebration. Never having been to Charlotte, Zotigh was invited by a former Smithsonian Affiliations Intern Partner, Brandie Macdonald (Choctaw/Chickasaw), whom he met while she interned in the Education Department at NMAI during the summer of 2011. At the CMH, Macdonald is Education and Volunteer Coordinator and has already taken the practical experience she learned on the national level from the Smithsonian and translated it to successful programming on the state level for docents and CMH’s educational programs. Zotigh’s appearance at the American Indian Heritage Month Celebration also coincides with the exhibition Native Words, Native Warriors, organized for travel by the Smithsonian Institution Traveling Exhibition Service, and currently on view at CMH.

At the American Indian Heritage Month Celebration, Zotigh will be participating in a blessing of the grounds, a hoop dance workshop, hand drum demonstration and a performance called “Musical Journey Through Indian Country: Diverse Songs from Alaska to Florida.”  He’s spoken before queens, attorney generals, heads of state, presidents, university students, and children with the goal of crossing cultural divides and reaching out to communities.  When he’s not traveling, Zotigh continues the conversation on his blog, Beyond FAQ: Let’s Talk, at NMAI.