Sousa Archives and Center for American Music, University of Illinois at Urbana-Champaign, a Smithsonian Affiliate in Champaign, Illinois, recently opened “Sousa and His League of Players: America’s Music and the Golden Age of Baseball,” on view through July 2011. Special thanks to Sousa Archive Center Director, Scott Schwartz, for this guest post. 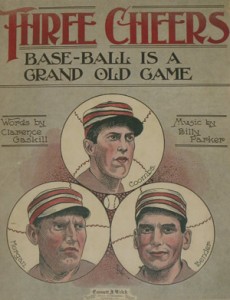 Sheet music from the Sam DeVincent Collection of Illustrated American Sheet Music held in the Archives Center of the National Museum of American History.

The University of Illinois’ 2010 American Music Month celebration will commemorate the 100th anniversary of the Sousa Band’s World Tour 1910-1911 and Sousa’s love of baseball. His band’s musicians served as his baseball team whenever they played against other bands’ and communities’ teams during their unprecedented concert tour around the world.  This November’s celebration includes the opening of a special new exhibit, America’s Golden Age of Baseball through Music, using historic sheet music and rare baseball cards from the Sam DeVincent Collection of Illustrated American Sheet Music, Warshaw Collection of Business Americana, and the Ronald S. Gabriel Baseball Memorabilia Collection on loan from the Smithsonian Institution, National Museum of American History, Kenneth E. Behring Center.  In addition, the University of Illinois bands will be giving a special performance in which they will be recreating the Sousa Band’s concerts given during their World Tour. Special performances include, “Rounding the Bases, Circling the Globe: Sousa’s World Tour and Baseball” and a lecture entitled, “The Essence of Uncle Sam: John Philip Sousa’s 1911 World Tour” on November 14, and “The Baseball Music Project” performed by the Champaign-Urbana Symphony Orchestra under the baton of Bob Thompson as conductor and Dave Winfield as host and narrator on November 12. 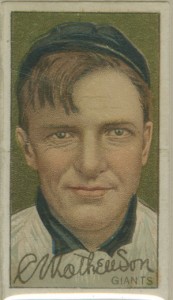 Historic baseball cards from the Warshaw Collection of Business Americana and the Ronald S. Gabriel Baseball Memorabilia collections held in the Archives Center of the National Museum of American History.

Music and baseball have played an integral role in the life and culture of America for nearly two and a quarter centuries, but it was not until the late nineteenth and early twentieth century when the two forms of popular entertainment became fully entwined as the country’s greatest past times.  Songs like the “Base Ball Quickstep,” The Umpire Is a Most Unhappy Man,” “Take Your Girl to the Ball Game,” “The Baseball Man for Me,” “Let’s Get the Umpire’s Goat,” “Home Run Bill,” “Take Me Out to the Ball Game,” and “Three Strikes Two-step,” dedicated specifically to John Philip Sousa’s baseball team, vividly portray America’s love affair with the national game.  For music and sports scholars and aficionados the years 1900-1920 are considered the golden age of the John Philip Sousa Band and baseball in America. The 1908 World Series is considered the greatest and most controversial baseball series of the twentieth century and the Sousa Band’s World Tour of 1910-1911 is undoubtedly one of the most unique music public relations efforts by a single individual to introduce the early twentieth-century world to American music, culture, and baseball.

We invite you to join us as we celebrate through concerts, lectures, master classes and exhibitions, John Philip Sousa’s and baseball’s impact on your nation’s diverse music and cultural heritage.  For further information on our programming and exhibitions please visit www.sousaarchives.org  or call 217-244-9309.