Tag Archive for: International Museum of Art and Science

The PPG Industries Foundation announced a $5,000 donation to the Frontiers of Flight Museum (Dallas, TX) to support aviation and space-flight education programs for Pre-K through 10th-grade students.

The Putnam Museum (Davenport, IA) has received a $300,000 grant to develop a Science and Technology Innovation Center. The Community Attraction and Tourism (CAT) grant from Vision Iowa will support the $2.2 million STEM (Science, Technology, Engineering and Mathematics) learning center that will provide hands-on learning in science, technology, engineering and mathematics.

Reginald F. Lewis Museum of Maryland African American History and Culture (Baltimore, MD) received a $128,000 grant award through The Star-Spangled 200 (SS200) Grant Program in the commemoration of the bicentennial of the War of 1812 for maximum benefit to Marylanders. The funding will go to support the exhibition “For Whom it Stands: The Flag and the American People” highlighting Grace Wisher’s contribution to the original Star-Spangled Banner and investigates the broader history and representation of the United States flag as an icon of our nation and its people

The Schiele Museum of Natural History (Gastonia, NC) received a $1,000 Smithsonian Institution Traveling Exhibitions Service Smithsonian Community Grant, sponsored by MetLife Foundation.  The award will be used to fund speakers’ fees for “Bugapolooza,” the museum’s annual celebration of the contributions made by insects to the natural world. Programs will include hands-on activities, interaction with entomologists, museum displays, and presentations by insect researchers in order to increase interest in entomology, as well as an awareness of the value of biological research programs. All programming relate to the themes of Farmers, Warriors, Builders: The Hidden Life of Ants.

A citizen science initiative led by the Adler Planetarium (Chicago, IL) and Oxford University won $1.8 million from Google’s Global Impact Awards. Zooniverse, a nonprofit collaboration between the two institutions that has already had close to 1 million volunteer scientists participating, links ongoing research to willing volunteers who, in most cases, comb through data that requires human interpretation. The 18 current projects include searching for lightcurve anomalies in telescopic images to help discover distant planets and classifying animals caught in Serengeti National Park camera traps. Zooniverse will use the money to rebuild its platform to make it easier for more science projects to take part. The money will also help the Adler extend the project to schools and youth and community groups locally.

Historic Bethlehem Partnership  (Bethlehem, PA) will hire and train costumed docents to act as historic ambassadors to Bethlehem’s Moravian history, thanks to a $45,000 allocation in 2014 by the Northampton County Council.

The American Alliance of Museums has announced that eight museums were newly accredited including  an Affiliate, the National Museum of Nuclear Science and History (Albuquerque, NM).

Assistant Superintendent Peter Aucella of the Lowell National Historical Park (Lowell, MA) received the
Department of the Interior’s Superior Service Award in recognition of his 23-year career with the National Park Service and his stewardship of the Lowell Summer Music Series.

The Executive Board of Trustees of the International Museum of Art & Science has appointed Danella Hughes as its new Interim Executive Director. 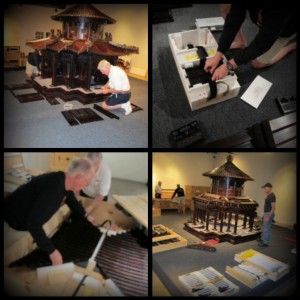 After 5-years on the road visiting 5 Affiliates in Illinois, Texas, New York, and Kentucky, a team of experts packed-up the Ten Thousand Springs Pavilion at the International Museum of Art and Science (McAllen, Texas) at the end of August. The Pavilion reached nearly 150,000 visitors while on view at Peoria Riverfront Museum, Irving Arts Center, Flushing Town Hall, The Headley-Whitney Museum and IMAS. We’re grateful to Don Williams from the Smithsonian Museum Conservation Institute who traveled to each Affiliate with a team of volunteers to help install and de-install the Pavilion.

Feeling nostalgic? Wander down memory lane through these past posts from The Affiliate Blog:

Where Will the Pavilion Go Next?

Spend your summer at a Smithsonian Affiliate! Check out these events in your neighborhood in July and August.

Gabrielle Tayac (Piscataway), National Museum of the American Indian curator of the IndiVisible exhibit will give a public lecture on the similar histories of African-Native Americans and Acadian/Wabanaki relations at the Abbe Museum in Bar Harbor, 7.10.

FLORIDA
Lindsay Bartholomew, science curator at the Miami Science Museum, presented as part of the Smithsonian Center for Learning and Digital Access online webinar, Do It Yourself Astrophotography:  Applications for the Classroom and Beyond, along with Mary Dussault, Smithsonian Astrophysical Observatory, in Washington, D.C, 07.10.

COLORADO
National Outreach Manager Aaron Glavas will be speaking at the public announcement of the Telluride Historical Museum as a new Smithsonian Affiliate in Telluride, 7.29.

MASSACHUSETTS
The USS Constitution Museum will host a teacher workshop featuring a lecture by Sidney Hart, Senior Historian from the National Portrait Gallery, in Boston, 07.26 and 08.09.

Four Affiliates are participating in a Smithsonian EdLab teacher workshop, Connecting Classrooms, throughout July and August –the South Dakota State Historical Society in Pierre; the International Museum of Art and Science in McAllen, Texas; the Museo de Arte de Puerto Rico in San Juan; and Bisbee Mining and Historical Museum in Arizona.

LAST CHANCE! See these exhibitions in your community before they close!

CONNECTICUT
The SITES’ exhibit Ramp It Up: Skateboard Culture in Native America closes at the Mashantucket Pequot Museum & Research Center, in Mashantucket, 07.21.

TEXAS
Within the Emperor’s Garden: The Ten Thousand Springs Pavilion exhibit closes at the International Museum of Art and Science, in McAllen, 08.18. 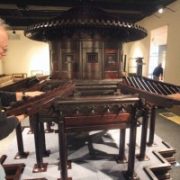 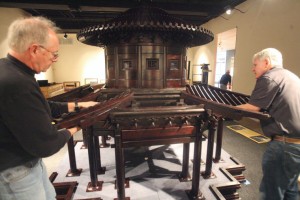 Smithsonian scientist Rusty Russell shows off a specimen he collected in the desert at the 2009 Citizen Science Week. During the week from Feb. 12 through 16, school groups will get the opportunity to work with Russell at the Riverside Metropolitan Museum.

Events in Affiliateland for December 2012-January 2013

TEXAS
The National Postal Museum will host the EdLab! Professional Development workshop at the International Museum of Art and Science in McAllen, 01.09.

FLORIDA
Kevin Gover, Director of the National Museum of the American Indian, will deliver remarks and observations on Native American art and identity at the Frost Art Museum & The Wolfsonian in Miami, 01.12.

Roger Launius, space curator at the National Air and Space Museum, will present a public lecture on the history and possible futures for human and robotic spaceflight at the Museum of Arts & Sciences in Daytona Beach, 01.19. 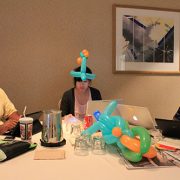 Special thanks to our Smithsonian Affiliations summer interns Lisa Hung (University of California, Irvine) and Neema Amadala (University of Calgary) for participating in the Smithsonian’s EdLab Teacher workshops in order to share their experiences with us. This is the final guest post in their “Teaching in a 21st Century Classroom” series.

We finished our workshop week surrounded by fellow teachers absorbing technology and harnessing creativity. Like in the classroom, it’s important to leave time for reflection after a project to debrief and process the information gained.

Day Four was all about giving the teachers a chance for this reflection. A chance to put into practice the skills and tools we explored over the week through the creation of our own mission-based learning plan. The mission-based learning plan brings together real objects with technology; it takes the classroom beyond its four walls into the community, not chaining students’ creativity to their desks but giving them the freedom to explore their own neighborhoods and spark change driven by their own passion.

The technology that was used all week was returned and the time came for the teachers to leave behind the EdLab. The mission isn’t over for these teachers though; these missions are an ongoing process with an EdLab alumni community for teachers to continue sharing their triumphs and tribulations. Maybe the tools and technologies are not as readily available to you, but teaching in a 21st-century classroom isn’t impossible, EdLab inspires you to teach differently, to experience a different way of learning, to just explore because the mission is possible.

In July we will welcome Susan Zwerling from the International Museum of Art and Science, a Smithsonian Affiliate in McAllen, Texas, as she begins her EdLab journey. We plan on following her progress during her two-week stay so stay tuned for more EdLab blogs! For more information, contact the EdLab team at npm.mobilelearning@si.edu . 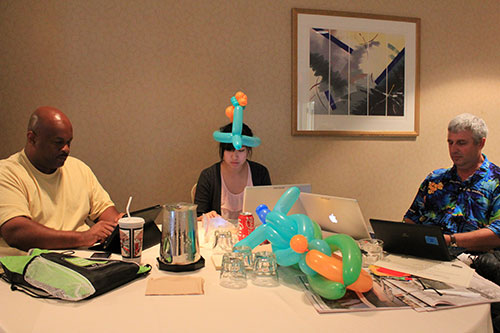