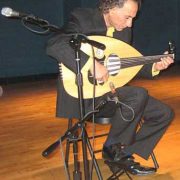 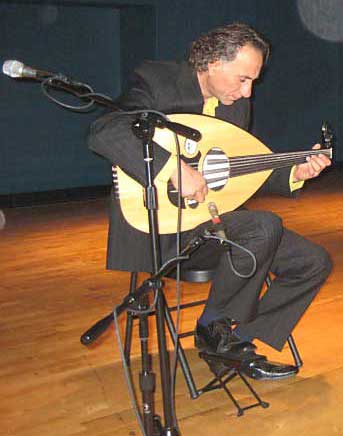 The Arab American National Museum (AANM), our Smithsonian Affiliate in Dearborn, Michigan, is the first museum in the world devoted to Arab American history and culture.  Through its programs and exhibits the museum, situated in the midst of the largest Arab American community in the U.S., demonstrates how “Arab Americans have enriched the economic, political and cultural landscape of American life.”  One powerful example of this mission came to life October 1, when museum-goers had the opportunity to hear one of the world’s master oud players, Smithsonian Folkways Grammy-nominated recording artist, Rahim AlHaj accompanied by percussionist, Issa Malluf.

AlHaj, a native of Iraq, and a student of the famed Munir Bashir, graduated from the Baghdad Conservatory of Music in 1990.  A political exile shortly afterwards, AlHaj lived in Jordan and Syrian until granted refugee status and resettled in Albuquerque, New Mexico in 2000.  His virtuosity and bubbling personality have helped relaunch an impressive performing and recording career, bringing the sound of the oud and its 5000-year old history to audiences all over the United States, and increasingly around the world.

AlHaj and the Smithsonian came together under the guiding hand of the Smithsonian Folkways Deputy Director and Middle Eastern music scholar, D. A. Sonneborn.  The resulting album, When the Soul is Settled: Music of Iraq, earned a Grammy nomination in 2008 and, in the words of one critic, “was like God breathing life into clay.”   This may well describe how many in the audience felt on October 1.

Through the auspices of the Arab American National Museum, AlHaj and percussionist Malluf, had the opportunity to demonstrate their art to students at the O.W. Holmes Elementary and Middle School in Dearborn.  All seemed intrigued, delighted, and by the end of the session, a little more informed about the great traditions of Middle Eastern music, lovingly performed by these dedicated artists.

Our thanks to Anan Ameri, Devon Akmon, Aaron Barndollar and their wonderful colleagues at the Arab American National Museum, and to D.A. Sonneborn, Dan Sheehy, Richard Burgess, Pete Reiniger and their colleagues at Smithsonian Folkways Recordings, for applying their energies and resources toward keeping this music alive and accessible, and for bringing this awesome Affiliate moment together on a night in Michigan, that few will forget.

See the photo album from the concert on the Smithsonian In Your Neighborhood Facebook page. 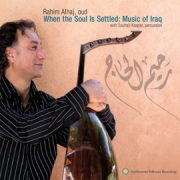 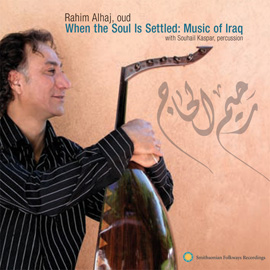 If you happen to be in the Detroit area on October 1, be sure to stop in at our Affiliate, the Arab American National Museum (AANM) in nearby Dearborn, to hear Smithsonian Folkways, Grammy-nominated, oud virtuoso Rahim Alhaj.  Alhaj performs in conjunction with the opening of the museum’s new Connecting Communities exhibition and as part of the ongoing Global Thursdays performing arts series.

Alhaj is considered one of the world’s masters of the oud, a pear-shaped, stringed instrument, often seen as the predecessor of the western lute.  Born in Iraq, Alhaj studied at the prestigious Baghdad Conservatory of Fine Arts, under the renowned Munir Bashir.  His opposition to the rule of Sadadam Hussein led to imprisonment and thirteen years of exile in Jordan and Syria before coming to the United States in 2000 under a UN refugee resettlement program. Now a resident of Albuquerque, New Mexico, Alhaj teaches, composes, and maintains an active performing schedule throughout North America and around the world.

The Smithsonian Folkways recording When the Soul is Settled: Music of Iraq, featuring Alhaj and Lebanese-born percussionist Souhail Kaspar, received a 2008 Grammy nomination in “The Best Traditional World Music Album” category.  The Los Angeles Times called the album “a convincing affirmation of an embattled area of the world,” and another critic likened Alhaj’s oud playing to “god breathing life into clay.”

AANM was established to bring the voices and faces of Arab Americans to mainstream audiences, and works to dispel misconceptions about Arab Americans and other minorities. Opened in 2005, the museum has received widespread acclaim for its architecture, exhibitions, and educational programming.

We look forward to the upcoming event when the museum and the musician join forces for what guarantees to be an unforgettable evening.

Smithsonian Folkways, the nonprofit record label of the Smithsonian Institution offers Affiliates savings on recordings at www.folkways.si.edu. Enter code SIAFFILIATE during checkout and save 10% on any purchase. From the Oud mastery of Rahim AlHaj and other international music to traditional American folk music from Pete Seeger and Woody Guthrie, and children’s favorites by Ella Jenkins and Elizabeth Mitchell, Smithsonian Folkways presents a world of sound that is “of the people, by the people, and for the people.”