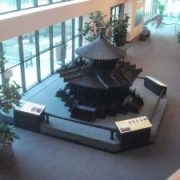 Two weeks ago found me in Irving, Texas, along with Groopsters Bob Klein and Bill Ferguson from the Professional Refinisher’s Group (aka “Groop”), dismantling the Ten Thousand Springs Pavilion at Smithsonian Affiliate, Irving Arts Center.  We’re packing it for travel to its next temporary home in Flushing, NY, at Affiliate, Flushing Town Hall. Thus far Groop members have donated over 75 man-days toward the installation and de-installation of the exhibit, which could not be accomplished otherwise. Here’s a peek at the de-installation: 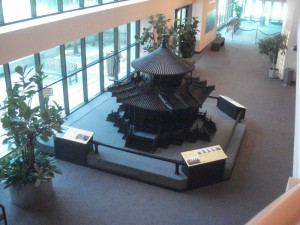 The setting for the Ten Thousand Springs Pavilion in the lobby of the Irving Arts Center was truly spectacular, exposing the magnificent artifact to tens of thousands of patrons. 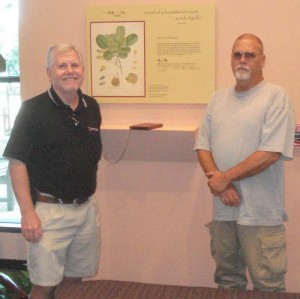 Bill (l) and Bob (r) were real troopers. This was Bill's second rodeo with me, and Bob's fifth(!).

We were joined in our endeavor by the skilled and burly crew for the Irving Arts Center when it came time to handle the really heavy and awkward stuff. 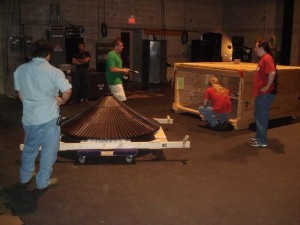 The building crew for the Irving Arts Center was an amazingly helpful and professional group. The gigantic roof portions had to be hand carried a few hundred feet through the building to get reunited with the crates. 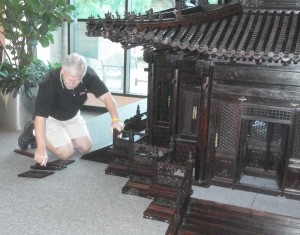 Not too surprisingly, it comes apart much faster than it goes together. 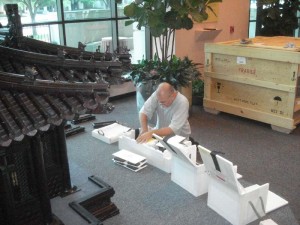 A place for everything, and everything in its place. 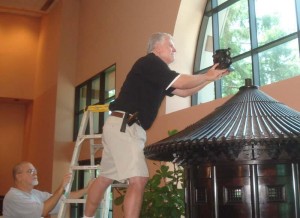 Bill got the honors this time of removing the impossibly ornate carved finial. 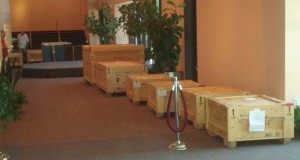 All packed up with somewhere to go.

The project went smoothly and quickly.  I had allotted three full days of work, but we were done by late  afternoon of day two. It was truly a delight to spend productive time with these two Groop brothers and the fellowship it entailed.

Next stop is Flushing, New York, where the local logistics will require a sunrise Sunday beginning.  The exhibit will open October 16, 2010.

About the Ten Thousand Springs Pavilion
The structure is a 1 to 5 model of the celebrated and intricate classic Chinese pavilion that stands within the Forbidden City in the heart of Beijing. The model of the pavilion was gifted to the Smithsonian by Dr. Chan Laiwa and the China Red Sandalwood Museum in Beijing. Dr. Chan founded the museum to preserve and perpetuate the ancient Chinese art of red sandalwood carving.

Made by Chinese artisans using traditional Chinese carving and fine furniture techniques, the model captures the beauty of the original pavilion, and is an outstanding example of traditional Chinese carving. Artisans at the China Red Sandalwood Museum constructed this model of red sandalwood, treasured for its dark glossy color and musty floral fragrance. No nails are used; the entire structure is put together with mortise-and-tenon joinery. Currently, nearly 60 percent of red sandalwood carvers are women. Red sandalwood was highly prized in imperial China, and was used to create intricately carved furniture and decorative objects. Because of the demand for this wood, the tree nearly disappeared in China – along with the art of carving it.

The Ten Thousand Springs Pavilion is one of the 20 or so structures that are part of the private pleasure grounds for two dynasties of Chinese emperors. The Imperial Garden of the Forbidden City was a retreat for the emperor and his family allowing quiet contemplation of nature and communion with the spiritual world.