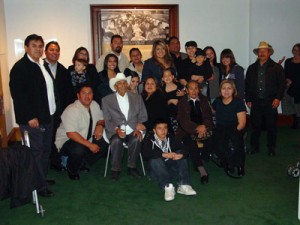 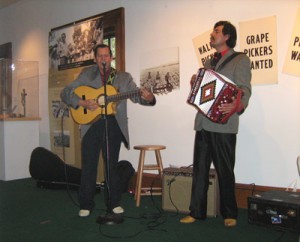 Juan Villa and friend performing Corridos at the "Free Family Day" at the Sonoma County Museum.

This past November, Sonoma County Museum opened the Smithsonian Institution Traveling Exhibition Service’s (SITES) Bittersweet Harvest: The Bracero Program, 1942-1964 and they hoped that their local community would help bring the exhibition alive.  The museum was not disappointed.  Through a busy schedule of public events at the museum, visitors responded to the exhibition in a very personal way.

When the National Museum of American History (NMAH) began researching the Leonard Nadel photographs that were taken to document the lives of the migrant farm workers, curators realized that they had an enormous asset to learn more about the images: the people who were there.  Many braceros are alive today, never having shared their past stories with anyone other than their immediate families.  In some cases, their children are not even aware of their pasts.  Research focused on collecting oral histories and documenting experiences of the thousands of workers that participated in this government program.  When the traveling exhibition was organized, curators hoped that each stop on its tour would yield more stories from this important chapter in American history.  Sonoma County Museum’s programs did just that. 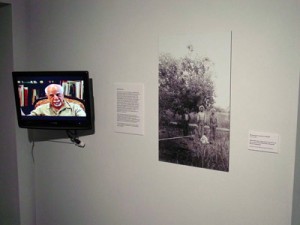 Eric Stanley, Exhibitions and Collections Curator at the Sonoma County Museum told us how they approached the programming that complemented the exhibition so well.  The museum began with video oral histories of local braceros, filmed several months before the opening.  “The oral history project was sponsored in part by a programming grant from SITES, which helped facilitate the project,” said Eric.  Eric also had the opportunity to see the NMAH installation of the exhibition, while in Washington, D.C. as a Smithsonian Affiliations Visiting Professional.  He was able to meet with staff who had planned programming for the original show, which inspired some facets of the installation at the Sonoma County Museum, including a hands on table at which visitors could try out some of the tools braceros used.

The video oral histories became the centerpiece of the opening reception, which drew many of the interviewed braceros and their families.  One guest, Cruz Leon Martinez, worked as a bracero before settling in Sonoma County- where he found work in a winery.  Mr. Martinez attended with several generations of his family and guests, proud to share the video oral history with them.

Former bracero Cruz Leon Martinez (seated with hat) and his family at the opening reception.

Sonoma County Museum also hosted a “Free Family Day” which featured live performances of corridos and other songs about labor and migration.  The standing-room only event featured a recent documentary on the Bracero Program and was well covered in the media.   Eric told us that the exhibit has been very popular with tour groups and that he has received many thank you’s from students who have visited the exhibition.  One such note says, “I want to thank you because you gave us the opportunity to go see the museum. I learned about how people were living in their past . I’m going to ask my mom to go to the museum with my sister, because I would like to see my little sister learning about our past.”

food for thought
Scroll to top