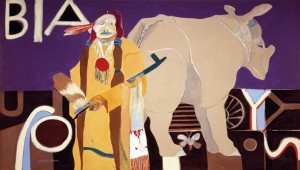 This October the Denver Art Museum opened Super Indian: Fritz Scholder, 1967-1980 which explores how Fritz Scholder used color and composition to create the powerful and innovative works of his Indian series. The exhibition features more than 40 monumental paintings and lithographs, including works loaned from Smithsonian Institution and Affiliate museums. With the support of these institutions the Denver Art Museum was able to realize an exhibition that fully engages with Scholder’s work from the period of 1967 to 1980; highlighting major themes and artistic approaches within the series.

From the National Museum of the American Indian comes two works that draw attention to Scholder’s Pop art sensibilities with their bright color, scale, and use of popular, everyday imagery. These paintings, Indian and Rhinoceros (1968) and Walking to the Next Bar (1974), also exhibit his interest in social issues such as the conflicted relationship between American Indians and the Federal government and alcoholism respectively.

Also on view is Indian in Contemporary Chair (1970) from the Smithsonian American Art Museum. With the figure’s gritty, expressionistic rendering, its inclusion contributes to the interpretation of English artist Francis Bacon’s influence on Scholder’s style and composition. Furthermore, the contrast of an Indian subject within a contemporary setting serves to challenge viewers’ assumptions of the place of American Indians in the present day, another theme that runs throughout the exhibition. 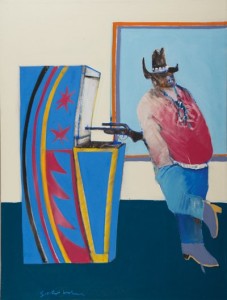 In addition to the fourteen works from the Denver Art Museum, works from two other Smithsonian Affiliates are also featured in the exhibition. From the Booth Western Art Museum is Indian at a Gallup Bus Depot (1969) depicting what Scholder called an “Indian cowboy” in front of an arcade machine, highlighting Scholder’s Pop art sensibility as well as the influence of his teacher Wayne Thiebaud. And, from the Heard Museum comes Indian Dying in Nebraska (1972) adding to the exhibitions exploration of dark and mysterious subjects.

With generous institutional support such as this, visitors to the exhibition are better able to explore the rich work of Fritz Scholder. The exhibition continues at the Denver Art Museum until January 17, 2016. It will then travel to the Phoenix Art Museum February 16, 2016 to June 5, 2016 and the Nerman Museum of Contemporary Art in Overland Park, KS June 23, 2016 to September 18, 2016.

Affiliates in the news- Thanksgiving edition!

what’s going on in Affiliateland, December 2015 – January ...
Scroll to top