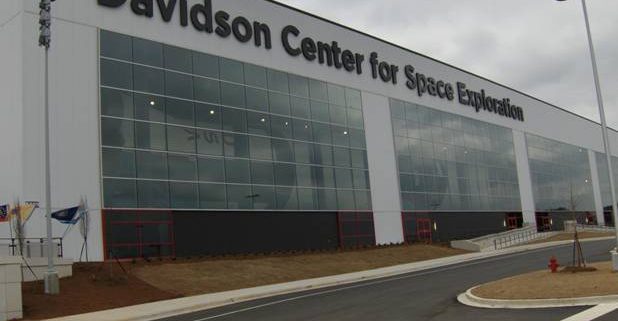 as reported by Caroline Mah, coordinator for the southeast:

Not only does January 31, 2008 mark the 50th Anniversary of America in space, but it also celebrates the U.S. Space and Rocket Center’s (Hunstviille, AL) official opening of their new Davidson Center for Space Exploration, home to the recently-restored Saturn V rocket.  This spectacular $22 million facility was named after Julian and Dorothy Davidson, who contributed $2 million. When you first enter the building, you have to walk up a flight of stairs to actually enter the space that holds the Saturn V rocket. Once you enter the space, it’s difficult to describe the enormity of the rocket.  After many failed attempts at getting a shot of the whole rocket, I just settled for the best angle I could find. Harold Closter and I had the great honor of attending U.S. Space and Rocket Center’s VIP reception, which was attended by some 1400 guests. Just the massive size and space of the building seemed to drown out the sounds of conversation amongst the 1400 guests. With everyone gathered under one roof (68,200 sq. ft) and under one rocket, which stands ten feet above the ground, the highlights of the evening began with a gala dinner, an awards ceremony, and grand opening of the imposing Davidson Center for Space Exploration.The speakers themselves were awe-inspiring, mostly ranging from retired astronauts Buzz Aldrin, second man to step on the moon; Jim Lovell, Apollo 13 Commander; John Hendricks, CEO of the Discovery Channel; and Konrad Dannenberg, believed to be the eldest of the surviving members of the von Braun rocket Team.   Walter Kronkite, legendary CBS journalist and receipient of the Center’s  Lifetime Achievement Award along with Konrad Dannenberg, sent a speech which closed by declaring, “[Hunstville] is and always will be; the Rocket City. And that’s the way it is, Thursday, January 31, 2008. Fifty years to the hour [that America entered space]. This is Walter Cronkite. Good night.”

Is your audience contributing to your permanent exhibitions? Should t...

A visit from the Pequots
Scroll to top