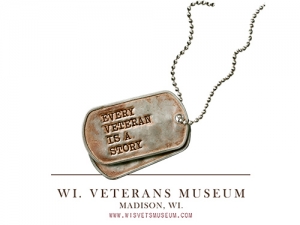 Every Veteran Is A Story

The Wisconsin Veterans Museum, Madison, Wisconsin, honors and affirms the role of Wisconsin’s veterans in shaping our nation’s history.

See below for ways you can collaborate with us! We want to talk about traveling exhibitions – both banner and full exhibits with artifacts – and ways we can bring them to your neighborhood. 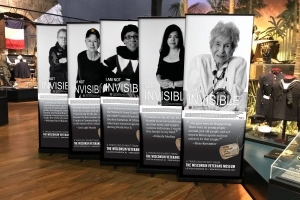 There are five (5) traveling exhibitions available for your community. Exhibition details on our Traveling Exhibition page.

Fur, Feathers and Fidelity: Military Mascots– features Mascots and their important service in the military.

Working Warriors: Military Life Beyond Combat–features the almost 75% of military work that is considered non-combat.

Wisconsin Remembers: A Face For Every Name–features a photo for each of the 1,161 Wisconsinites officially listed on the Vietnam Veterans Memorial in Washington, D.C.

WWI Beyond the Trenches: Stories from the Front– marks the centennial of the First World War and features an up close and personal look at the Great War through the eyes of Wisconsin veterans.

I AM NOT INVISIBLE (IANI)–(IANI) awareness campaign began as a program featuring twenty photographs of Oregon women who were military veterans. Now a nationwide program, the IANI campaign strives to increase awareness and generate dialogue about the role of women veterans. 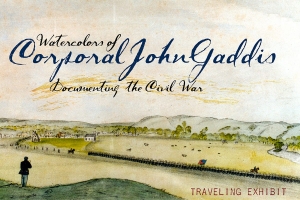 While these traveling exhibits that include art may be trickier to travel right now, we’d still like to chat about opportunities to share in the future!

SANTOS ZINGALE: ARTIST TURNED SAILOR
This fine art traveling exhibit features thirteen original sketches completed by Santos Zingale while he was on board the USS Bremerton during WWII. Zingale provides an intimate view of daily life on the ship, including moments of rest and relaxation. This exhibit of framed charcoal sketches is suitable for professionally-staffed museums and galleries.