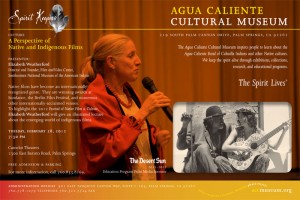 Later this month, the Agua Caliente Cultural Museum (Palm Springs, CA) will host their annual Festival of Native Film & Culture in collaboration with the Film and Video Center at the National Museum of the American Indian (NMAI).  Elizabeth Weatherford, Director of the Film and Video Center at NMAI, works closely with Agua Caliente staff to identify exciting films and filmmakers working from a Native American perspective.  A highlight of this popular event is the commentary Elizabeth provides prior to screening the films and an engaging Q&A afterwards.  This year Elizabeth will give an illustrated lecture about the emerging world of indigenous films.

“Elizabeth has been our guest programmer for several years now.  Our Festival of Native Film and Culture deals with Native American and Indigenous films from around the world.  Elizabeth has her finger on the pulse of the Native and Indigenous film world.  From cutting-edge shorts to feature films, she has given us the best that the genre has to offer.  Under her tutelage, we have grown in both quality and stature.” 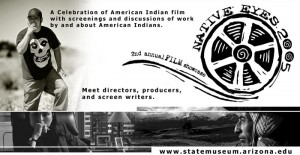 Elizabeth has also worked with other Affiliates on film festivals; she continues to work with the Arizona State Museum and the Hanson Film Institute, both at the University of Arizona on an annual event, the Native Eyes Film Showcase.  Lisa Falk, Director of Education and Associate Curator at the Arizona State Museum, discussed the ways that Elizabeth Weatherford has worked with them:

“Elizabeth, her staff and the resources of the Film and Video Center are invaluable to us as they provide a depth of understanding of Native filmmaking and festival organization as well as connections to filmmakers.  We have worked with Elizabeth Weatherford and her staff on our Native Eyes Film Showcase for years- consulting with them about new films and filmmakers and receiving recommendations.  The NMAI Film and Video Center helps us add breadth and depth to our programming, in particular enabling us to learn about and include films from Canada, Australia, and New Zealand to our offerings.”

Let us know if you’re interested in a film series of your own- we can connect you with Elizabeth Weatherford at NMAI or other resources at the Smithsonian.  (Special thanks to Michael Hammond and Lisa Falk for images and insights!)

coming up in Affiliateland in February 2012
Scroll to top