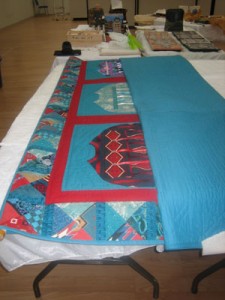 Thanks to Raj Solanki of the National Museum of the American Indian for the guest blog post.

Preparing to install the quilt at the Riverside Metropolitan Museum

What was so compelling about the exhibit, is the relationship that the Museum and Dr. Focht developed with each artist. Each artist was a co-curator to the exhibition and had a hand in developing content and programming. Because of this, NMAI eagerly said yes to the loan request of a Margaret Wood work titled Ribbon Shirt Quilt (NMAI 26/5800).

In March, I couriered the quilt and oversaw the installation at Riverside Museum. As a courier, I get to “see the behind the scenes” before a show goes up, and I was impressed by the objects chosen for the exhibit. Some objects came directly from the artists and private collectors. Other works were lent by other Smithsonian Affiliates – the Heard Museum in Phoenix, and Michigan State University Museum in East Lansing. I wished I could have stayed longer to see their “Meet the Artist” Program, which took place in April. However, the objects spoke for themselves.

Each artist has a way of conveying a story in her medium. The Riverside Museum allowed space for each artist to tell her story whether it was family history or Native identity in today’s context. Displayed prominently is Margaret Wood’s Ribbon Shirt Quilt, which was inspired by the meaning of a ribbon shirt as a symbol of â€˜Indianness’. Explained on her website, Margaret writes “The origins of the ribbon shirts harkens to the fringed leather shirts of the Plains Indians. When woven cloth and ribbons became available as trade items, Plains women used the new materials to create facsimiles of the original leather shirts. There are some tribal styles and characteristics and a lot of variety and originality displayed in the ribbon shirts being made. They are worn by men, women, babies, elders and teenagers.” 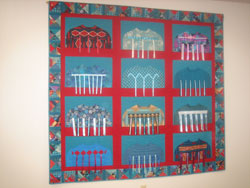 The Riverside Metropolitan Museum is in the heart of Riverside, CA and is part of the city’s effort to revitalize the area. The faÃ§ade of the building is under renovation. But don’t let the scaffolding fool you. It is not closed! This little building offers some great exhibits on natural history of the area, history on the Native population as well as the community that settled in the area and its continuing growth.

The Riverside Museum was a recipient of the 2010 National Museum of the American Indian’s Indigenous Contemporary Arts Program.

Coming Up in Affiliateland in June 2011