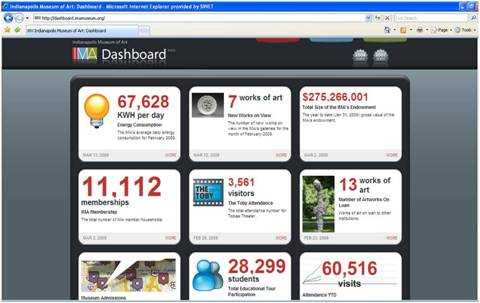 SI Staff were treated last week to a lecture by Max Anderson, director of the Indianapolis Museum of Art.  He kicked off his lecture with a “memo” by President Obama urging transparency not only in  government, but across all organizations.  Anderson then made quite a cogent argument for greater transparency in the museum world.

He argued, for example, that the statistics often cited for success by museums – attendance, membership – are often misleading and meaningless to society as a whole.  So what matters then?  Anderson suggested that issues like:  how we steward the environment and teach others to do so; how well we remain vigilant about Nazi-era and Antiquities provenance research; even, how is what we serve in our museum cafes improving or exacerbating visitors’ health?

Anderson addressed this issue at his museum with a dashboard.  This device provides lots of statistics to a range of museums metrics – where visitors come from, the size of the Museum’s endowment, new works on view, among other stats.

Why do this?  Another question may be, why not?!  As he said, making this kind of information readily available forces the staff to engage in constant vigilance and performance improvement, and lets visitors know what the Museum cares about.  It builds trust both inside and outside the organization.

The final nail to this argument came when Anderson reminded the audience that in the first round of the recent stimulus bill, museums were lumped in with casinos as being exempt from receiving stimulus funds.  Luckily, museums were taken off the list, but the obvious question was, what are we doing (or not doing) to have lost such a critical societal distinction?

The Smithsonian was forced to become more transparent recently as the press well documented, and we all agree we are better for it.  You can now watch Regent Meetings for example, and read our Governance Scorecard, among other improvements.  And, you can watch all of Anderson’s talk here.

Has your museum taken any recent steps in regard to transparency?

The Other 90% in Atlanta

Do you qualify for stimulus funding?
Scroll to top