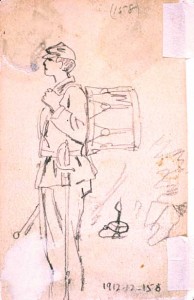 Winslow Homer's 1862 Study of a Drummer, in the collection of the Smithsonian's Cooper-Hewitt, National Design Museum.

Here at Affiliations, we’ve been hearing about all kinds of plans to commemorate the 150th anniversary of the Civil War.   Thinking about borrowing artifacts?  Looking for a speaker for a conference or public program?  Wonder what kinds of exhibitions other museums are organizing?   Here’s what we’ve heard so far from inside the Smithsonian and around the Affiliate network.

For the Smithsonian, the best and first stop to view the vast and manifold collections on this topic is the Civil War@Smithsonian website.  There, artifacts from several Smithsonian museums are grouped under such topics as Slavery & Abolition, Soldiering, Life & Culture, Leaders and Abraham Lincoln, among others.  (The site even talks about the various ways that the Smithsonian itself was involved in the Civil War.)

And speaking of Lincoln, you’ll find a treasure trove of resources (and possible speakers) at the Lincoln Online Conference site, sponsored by the Center for Education and Museum Studies.   Here, Smithsonian scholars discuss a wide range of issues related to our 16th President from Lincoln’s Air Force to Mathew Brady’s photographs.

For even more ideas on programming or group tour itineraries, turn to the Smithsonian Associates’ Civil War Studies site.  You can also sign up here for the Civil War Studies enewsletter for up-to-date program information and original essays exploring all facets of the War.  Want to hear about the largest stash of money ever discovered?   Invite American History numismatics curator Richard Doty to talk to your audiences about confederate currency, and show a few examples from our collection.

If you’re an art museum, don’t despair – you might be interested in what the Smithsonian’s American Art Museum is planning to commemorate the War.  Better Angels of Our Nature: Art During the Civil War and Reconstruction will examine the impact of the Civil War and its aftermath on visual arts in America.   Information on commemorative exhibitions at the Portrait Gallery will be posted soon so watch out for that.

And how about in Affiliateland?  Many Affiliates are already planning commemorations of their own.  Here are some of the plans we’ve heard about so far:

–          the Frazier International History Museum (Louisville, KY) is planning a Civil War symposium, update to its permanent exhibition, & a traveling show called My Brother My Enemy

–          the Heinz History Center (Pittsburgh, PA) will be one of three sites to host a major Civil War exhibition and will produce two publications on photography and the role of African Americans in the Civil War, as part of PA 150,  a major statewide commemoration

–          the African American Museum in Philadelphia (PA) has already opened the Audacious Freedoms exhibition which explores the Underground Railroad, African American soldiers in the Civil War, and other topics

What are you planning?  Leave us a comment and let us know. 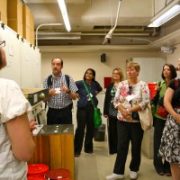 see for yourself: a conference adventure

Coming up in Affiliateland in February 2018 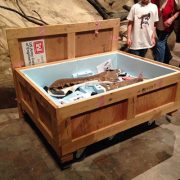 SI and Affiliates collaborate on Places of Invention

Coming Up in Affiliateland in May 2018

affiliates in the news: week of march 15