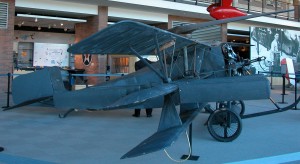 Congratulations to the College Park Aviation Museum on their 10th anniversary as a Smithsonian Affiliate!

Since their joining the Affiliations Program in March 2001, the Museum has been active in bringing important artifacts, speakers, and exhibitions from the National Museum of Air and Space to College Park, Maryland.  The Museum sits on the grounds of the world’s oldest continuously operating airport, which was founded in 1909 when Wilbur Wright established a flight instruction operation for the first military aviators.  Not surprisingly, the Museum displays Wright memorabilia on loan from the Smithsonian, including their pocket watch and a Medal of Congress.  The Museum also displays the impressive and historic Berliner helicopter, the product of an inventive father-and-son team to become the first Americans to make any significant progress towards the creation of a practical helicopter.

Over the years, the Museum has hosted Smithsonian exhibitions including SITES’ At the Controls, and NASM’s In Plane View and Fly Now!NASM’s Flight Posters.  They have  hosted Smithsonian speakers on a range of topics from women and African Americans in aviation to milestones in early aviation history.

Consider a trip to the Museum next time you’re in the D.C. area.  At just 8 miles away from downtown, visitors can experience this landmark of early aviation history, while seeing some Smithsonian treasures along the way.  Kudos to the College Park Aviation Museum for 10 years of collaboration, and here’s to many more years of our flying together!

wheeling visitors in…
Scroll to top