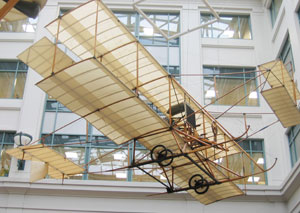 Centennial Celebration of the Wiseman Cook Flight with Smithsonian Curators

Wiseman Cooke Plane on display at the National Postal Museum.

Centennial celebrations don’t happen every day.  When the Sonoma County Museum, an Affiliate in Santa Rosa, California, set out to host an event to commemorate the 100th anniversary of the first airmail flight, they turned to the Smithsonian curators who care for the event’s primary artifact, the plane that made that journey a century ago.  Together, they’ve organized a program that will connect online viewers and live audiences at the Sonoma County Museum and the National Air and Space Museum to celebrate this event.

The flight was piloted on February 17 and 18, 1911 by Fred Wiseman.  Wiseman took off from Petaluma, California and flew 25 miles to Santa Rosa with three letters.  Wiseman’s plane is part of the collections of the National Air and Space Museum and is currently on display at the National Postal Museum.  The event carries even more significance to the local community because the Sonoma County Museum is located in a building that was the Santa Rosa post office in 1911.

During the program, Tom Crouch, senior curator, aeronautics, National Air and Space Museum and Nancy Pope, curator and historian at the National Postal Museum will share their knowledge about the flight.  Tom will discuss the historical context of the plane and Nancy will talk about its significance to postal history.

Please join us on Saturday, February 19th at 2pm Eastern Standard Time at the Smithsonian’s Ustream channel, where online viewers can watch the lecture and email questions to both curators.   If you would like to organize a similar distance learning program, contact your national outreach manager.

affiliates in the news
Scroll to top