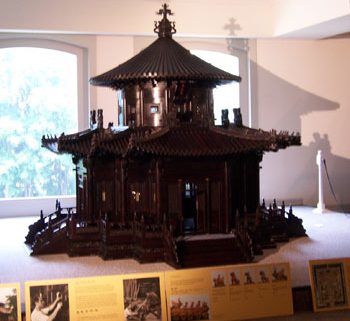 Special thanks for this guest post to Amy Gundrum Greene, Chief Administrator/Curator of Collections & Exhibitions at Headley-Whitney Museum, a Smithsonian Affiliate in Lexington, Kentucky. 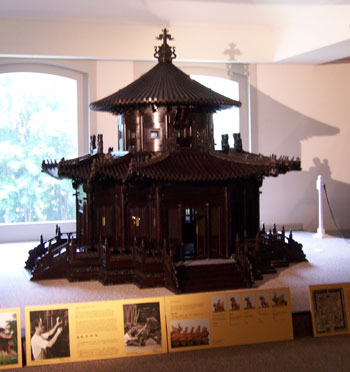 The Ten Thousand Springs Pavilion, a 1 to 5 (approx. 10’x10’x10’) scale model of the Pavilion in Beijing’s Forbidden City does not travel lightly.  The twelve large crates arrived on their own tractor trailer one overcast morning in September.  Forklifts were ready to lift the crates off the truck and then a series of pallet jacks and dollies were used to get them into the building.  A week later Smithsonian Museum Conservation Institute Senior Conservator Don Williams and his crew of eight volunteers arrived to put the Pavilion together.  It was fascinating to watch as the men brought the Pavilion alive during just 2 ½ days. 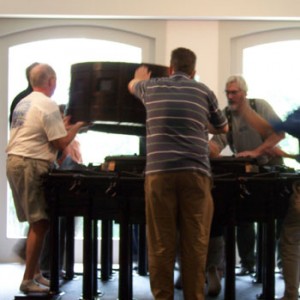 The Ten Thousand Springs Pavilion was going to be literally center stage for a year. We partnered with The Confucius Institute at the University of Kentucky to develop exhibits and programs to highlight Chinese culture during the Pavilion’s stay with us.  Two of our exhibits are Art on a Roll:  Modern Chinese Scrolls, on display until June and Modern Chinese Woodblock Prints coming in July.  We have also pulled Chinese ceramics from our permanent collection and put them out on display.  Along with The Confucius Institute we celebrated Chinese New Year on February 5th.  The celebration featured Chinese food, music, calligraphy and a Tai-Chi demonstration.  In addition there were workshops for children and adults to make paper lanterns and learn calligraphy.  Through our partnership with Smithsonian Affiliations, we are pleased to host the Pavilion through mid-September and hope many more people will enjoy it while it’s here at the Headley-Whitney Museum. 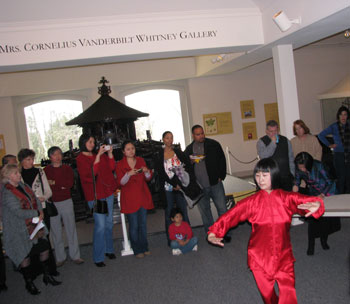 The Loan Clinic: Unlock the Mysteries of Sharing Collections