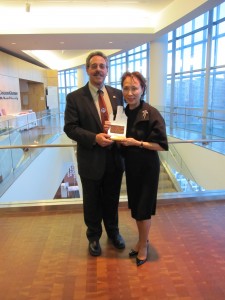 The American Association of Museum’s annual convention, this year in Los Angeles, provided us with the perfect opportunity to celebrate the tenth anniversary of our Smithsonian affiliation with the Japanese American National Museum (JANM), also celebrating its 25th anniversary.  On May 26, Smithsonian and Affiliate staff gathered at this inspiring museum to toast these special milestones.

Here are some excerpts from the gracious talk given by Akemi Kikumura Yano, JANM President and CEO:

“This year the Japanese American National Museum is celebrating its 25th Anniversary since its incorporation in 1985.  During that period, we have managed to renovate the former Buddhist temple building across our courtyard, open this Pavilion which allows us to house our collection, and expand again with our National Center for the Preservation of Democracy.”

“All along the way, our Museum has had a relationship with the Smithsonian.  When the Smithsonian was organizing its show, A More Perfect Union in 1987, our staff were consulted and contributed to that important exhibition on the Constitutional issues involved in the government’s mass incarceration of Japanese Americans during World War II.   A More Perfect Union ended up being one of the most popular exhibitions at the National Museum of American History and it was up for more than 10 years.”

“As the Japanese American National Museum developed, so did its relationship with the Smithsonian.  One of the proudest  moments for our community was when our exhibition, From Bento to Mixed Plate:  Americans of Japanese Ancestry in Multicultural Hawai’I was installed at the Smithsonian in 1999. “

“We were also very proud to host a number of Smithsonian-created exhibitions here at our museum in Los Angeles.  In 2004, Isamu Noguchi and Modern Japanese Ceramics, organized by the Arthur M. Sackler Gallery was a major critical success at our museum.  In the same year we hosted the National Museum of American History’s September 11:  Bearing Witness to History.  In 2005, we borrowed an exhibition from the Sackler Gallery titled, Japan After Perry:  Views of Yokohama and Meiji Japan.”

“The collaborative partnerships that the Affiliates program has created with us have been very rewarding indeed.  It’s a partnership based on mutual interest – that is, to broaden and share perspectives on history, culture, and the arts, and from our Museum’s point of view, through the Japanese American experience.”

affiliates in the news: week of May 24