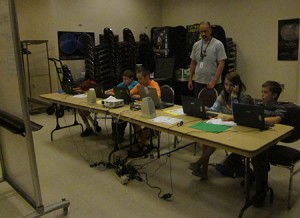 Special thanks to Jim Greenhouse, Space Science Director at the New Mexico Museum of Natural History & Science (Albuquerque), for this guest post.

The Youth Capture the Colorful Cosmos (YCCC) program turns science into art. Through hands-on exercises at Smithsonian Affiliates, students learn how to control the MicroObservatory robotic telescopes over the internet and take images of the universe. New Mexico Museum of Natural History and Science kicks off our blog series highlighting moments from the workshops and student projects on display at Affiliate organizations.

The New Mexico Museum of Natural History & Science in Albuquerque used the MicroObservatory program during a summer camp class called Planetarium Producers, offered June 9-13, 2014.  The camp was designed for children entering grades 7-9.  If the parents of a child who wanted to participate were unable to pay tuition, a scholarship program was available.  Each participant had one week to acquire images, process them, and use them in a planetarium program presented at the end of the camp.

Each child selected a constellation to focus on, and the only restriction was that it had to be one in which a MiroObservatory object was currently visible.  On the first day of class, the children watched the instructional videos on the MicoObservatory website.  A portion of each video was shown, then the kids were given time to perfect that skill before moving on.  Each child processed the images in any way they wished to highlight whatever scientific fact they included in their programs.  Besides describing the celestial objects they imaged, the camp class members showed how to find their constellations, talked about their mythology, and highlighted any other interesting facts in their region of the sky.  The children’s family members and friends, along with some of the museum staff, attended the planetarium program.  Similar programs will probably be offered for summer and holiday camps in the future.

The museum is also in the process of putting together a web page featuring the images produced by the camp participants and a link so that site visitors can order their own MicoObservatory images.  The page will launch by the end of November. 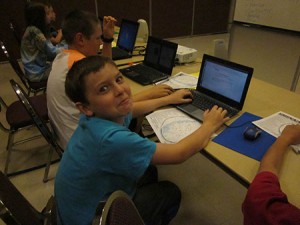 In 2012, I was working at the Museum of York County in Rock Hill, SC.  At that location, Education Coordinator James Wells partnered with a local middle school.  We visited their computer lab several times and the result was an exhibit displayed in the museum.  The students wrote poems that also incorporated a scientific fact about the objects in each image.  The projects were printed on Sintra board by a local printing company.  In addition to inviting all of their family to a reception at the opening of their exhibition, the kids had a field trip to the museum that included a planetarium show and Skype chat with the astronomers at the Harvard–Smithsonian Center for Astrophysics.

affiliates in the news- November 2014