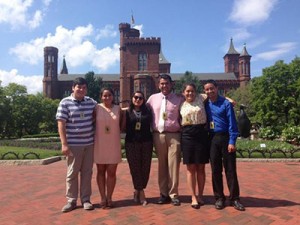 International Museum of Art and Science (McAllen, Texas)
Leader lessons: Erica Gonzalez
Erica Gonzalez learned a lot during her trip to Washington D.C. Now she’s applying what she learned at the International Museum of Art and Science in McAllen. She is one of 22 high school graduates accepted to the Smithsonian Latino Center’s Young Ambassadors Program.

Plimoth Plantation (Plymouth, Massachusetts)
Archaeologists seek exact site of pilgrims’ Plymouth colony
About 360,000 visitors a year come to Plimoth Plantation, the Smithsonian-affiliated museum featuring historical reenactments of life in the colony settled by Mayflower pilgrims in 1620. But nobody knows exactly where the Plymouth colony was located. Now, Smithsonian magazine’s online site reports, researchers from the University of Massachusetts at Boston have begun an excavation to pinpoint the site.

New Mexico Museum of Space History (Alamogordo, New Mexico)
SCI-FI CELEBRATION
He said that the museum is updating the Imax Theater. Orwoll said the theater will be getting new walls and lights. “The old decrepit Imax letters on the building are coming off,” he said. “They’re finally coming off and we are going to repaint the top of that building with Smithsonian blue colors.” Orwoll added that the museum is planning to get new exhibits. He said the museum will be getting a Smithsonian exhibit called “Earth from Space” and a new solar system exhibit.

Ellen NoÃ«l Art Museum (Odessa, Texas)
MUSEUM MATTERS: The Star Spangled Banner: Fourth of July
When I first received the notification from the Smithsonian to be the Project Director for the production of the original Star Spangled Banner permanent exhibit – the most treasured national icon at the National Museum of American History in 2007, I felt deeply humbled. A year later, President George W. Bush and the First Lady Laura Bush re-dedicated the exhibit to the nation. Ironically, his childhood home is yards away from my office at the Ellen NoÃ«l Art Museum. 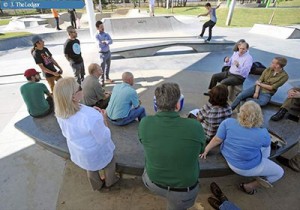 Scott Wheeler | The Ledger
Jeff Brodie, deputy director of the Lemelson Center for the Study of Invention and Innovation at the Smithsonian Institution, announced plans for Innoskate at the Lakeland Skate Park.

Polk Musuem of Art (Lakeland, FL)
Take a ride into skateboard culture at Innoskate in Lakeland
Innoskate is a celebration of the innovation and creativity of skateboarding. It started in 2013 Smithsonian Institution’s Lemelson Center for the Study of Invention & Innovation in Washington D.C.

All Decked Out! celebrates the art of the skateboard at Polk Museum of Art
The trend makes a local stop on Friday and Saturday when the Polk Museum of Art, part of the Smithsonian’s network of affiliate museums, presents Innoskate Lakeland. The event, conceived by PMoA curator Adam Justice, is one of only two offshoots of the original event; the other takes place at Seattle’s Museum of History and Industry in August.

Polk Museum, Smithsonian And City of Lakeland Collaborate for Innoskate
“The decision to go to Lakeland was easy,” said Jeff Brodie, deputy director of the Lemelson Center and historian. “We knew we wanted to extend Innoskate and we already had relationships in place in Lakeland.”

America in 101 objects: Smithsonian scholar Richard Kurin presents book, lecture Monday
From the Smithsonian Institution’s vast collection of 137 million items, Richard Kurin has culled just 101 things that tell the story of America from the days of George Washington to the Internet Age and everything in between. 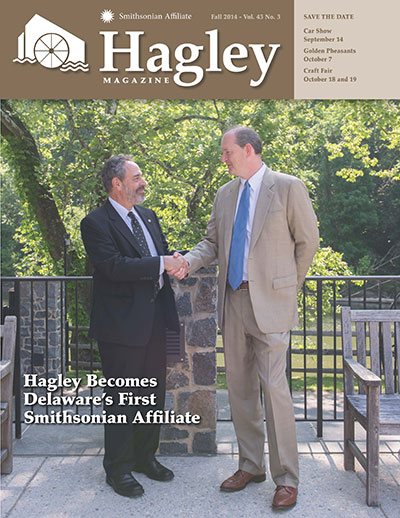 Hagley Museum and Library (Wilmington, Delaware)
Hagley Museum and Library designated as official Smithsonian Affiliate
“We’re certainly known regionally in Delaware and the Philadelphia area as a wonderful place to come and learn about the history of innovation,” Cole said. “But we really would love to cultivate a national audience for what we think is a national-caliber collection.”

Hagley named Delaware’s 1st Smithsonian Affiliate
“Hagley is a place where people can experience the history of innovation and be inspired to innovate in their own lives,” Hagley Executive Director David Cole said in a press release. “The Smithsonian offers an unmatched set of resources that we can use to fulfill our vision.”

Alaska’s Largest Museum Named Smithsonian Affiliate
This new relationship opens a lot of doors for the Anchorage Museum according to museum director Julie Decker. “It means we can have those conversations about other museums within the Smithsonian network, with other museums that have affiliate status as well, so it means we may be able to bring new things to Alaska and export other things from Alaska to these places “

Frost Museum of Art (Miami, Florida)
â€˜Our America’ exhibit at the Frost Museum strikes familiar chords in South Florida
As Frost director Carol Damian explains about the international student body, “Our job is not only to educate our students about what the art of their countries and this country may represent, but also to instill a sense of pride in their history by showcasing works of artists that have achieved tremendous respect and renown all over the world, and to say â€˜This is our story. This is your story.’ ”

Buffalo Bill Center of the West Invites Interaction With Its Online Collection for Both Virtual and On-site Visitors
In the most ambitious project to date, the Center of the West in Cody, Wyoming, has completely revamped its online collections database. Now, nearly every artifact that has been photographed–more than 20,000 objects from the Center’s extraordinary artifact collection–appear online.

Birmingham Civil Rights Institute (Birmingham, Alabama)
Lawrence Pijeaux reflects on nearly two-decade career at Birmingham Civil Rights Institute
Much of Pijeaux’s work at BCRI has come down to core values, especially with his staff. “I heard the messages growing up: the importance of an education, hard work, treating people the way you want to be treated, helping our own in times of need. Our staff embraces that.”

Birthplace of Country Music Museum (Bristol, TN)
Nashville stars to help commemorate opening of Bristol Sessions museum
“This new museum will not only tell the story of the Birthplace of Country Music, it will help pull back the curtain on the region where the music still resounds, and it will help introduce new generations, and we are all excited about that,” BCMA Board President Jim Tench said. “Our new museum has the potential (to inspire and bring people together through music) year round.”

Multiple Affiliates
‘A Look Into The Sixties’ Opens in Grand Central Terminal with Ribbon Cutting Ceremony
New York Governor Andrew Cuomo and CNN Worldwide president Jeff Zucker will officially open, A LOOK INTO THE SIXTIES, a museum-style installation in New York City’s Grand Central Terminal,curated for the public in cooperation with 11 Smithsonian Affiliates.