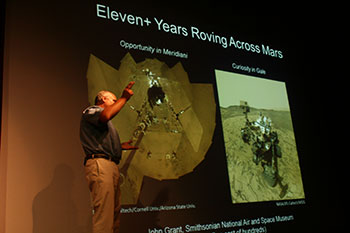 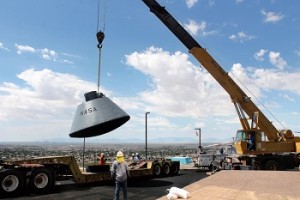 NASA boilerplate, BP-1207, was delivered to the New Mexico Museum of Space History Wednesday after it was restored and painted by Holloman Air Force Base airmen. (Tara Melton – Daily News)

New Mexico Museum of Space History (Alamagordo, NM)
ASA boilerplate returned to museum: After being restored by airmen, boilerplate will be highlighted for six months
Over two years ago, BP-1207 was awarded to the New Mexico Museum of Space History as part of the Smithsonian Affiliates Program and is on loan from the National Air and Space Museum.

South Dakota State Historical Society (Pierre, SD)
Lt. Gov. Michels to emcee Native American Day
At the conclusion of the speakers’ comments, Spiritual Leader Roy Stone of the Rosebud Sioux Reservation will lead attendees into the gallery for a special Cleansing Ceremony and Prayer with the newly displayed effigies including the Great Sioux Horse Effigy from South Dakota and horse memorials borrowed from the State Historical Society of North Dakota and the National Museum of the American Indian.

UTSA Institute of Texan Cultures (San Antonio, TX)
Smithsonian Exhibit on Display in Texas Educates about Sikh Culture
The permanent exhibit was commissioned by the Smithsonian Institution’s National Museum of Natural History in Washington D.C. and originally opened in 2004.

National World War II Museum (New Orleans, LA)
The World’s Top Museums, According to Travelers
Honoring nearly 600 institutions worldwide, the Travelers’ Choice awards have recognized the favorite museums that serve as cultural treasure troves for our community of millions,” says Barbara Messing, chief marketing officer for TripAdvisor. “These world-class museums provide an enriching experience that can be both inspiring and educational for travelers around the globe.” Travelers’ Choice Awards – Non-Art Museums in the US Top 10: #3. The National World War II Museum, New Orleans, LA.

National Museum of Industrial History (Bethlehem, PA)
National Museum of Industrial History gets closer to mid-2016 opening in Bethlehem
The museum will include 23 pieces on loan from the Smithsonian Institution’s 1876 centennial exhibition. The collection includes the likes of the Frick Eclipse portable steam engine and the Linde Wolf ammonia compressor, the oldest surviving large-scale refrigeration compressor in America.

Conner Prairie (Fishers, IN)
Conner Prairie to host annual Museum Day Live
“It’s so valuable to us because we are networked with the largest museum in the country. We’re able to take advantage of special speakers, special exhibits and they assist us with consultations. We’re affiliated with other museums across the country. It’s a nice network for us,” said Brodt.

Abbe Museum (Bar Harbor, Maine)
Acadia Night Sky Festival enters 7th year of stargazing
The festival starts with a presentation by keynote speaker John A. Grant III, a geologist at the Center for Earth & Planetary Studies at the National Air and Space Museum. Grant will present “Exploring Mars with the Spirit, Opportunity and Curiosity Rovers.” Following Grant’s presentation, attendees may enjoy the “Stars Over Sand Beach” event, where attendees can gaze at Acadia’s amazing night sky and learn about constellations guided by an Acadia National Park ranger.

Youth photos of cosmos to be shown at Abbe
The museum’s partnership with schools in the Wabanaki communities gave students the opportunity to research, learn about and photograph the cosmos using telescopes owned and maintained by the Harvard-Smithsonian Center for Astrophysics. “The goal of the YCCC II program is to use hands-on exercises to teach youth how to control the MicroObservatory robotic telescopes over the internet and take their own images of the universe,” said Abbe Museum Educator George Neptune, Passamaquoddy. “Here at the Abbe, the project also encouraged students to choose subjects based on Wabanaki stories about the stars. Each student had the opportunity to research traditional stories and interpret them in a modern context using 21st century technology.” 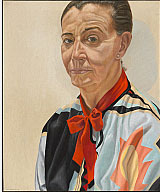 Portrait of Beth Levine (Lady with Red Bow), Philip Pearlstein (b. 1924), 1985, Oil on canvas. For the exhibition “Beth Levine: First Lady of Shoes” at the Long Island Museum.

Long Island Museum (Stony Brook, NY)
Beth Levine: The First Lady of Shoes
In addition to Levine’s iconic footwear, visitors will find photos, paintings, illustrations, film footage and other artifacts on display. The curator said even those who aren’t footwear aficionados will appreciate Levine’s work. “I think you can see these shoes as works of art,” Verin said. “You can really see a brilliant mind and talent at work.”

The Air Zoo (Portage, Michigan)
RADIO- WSW: Air Zoo’s ‘Black Wings’ Exhibit Tells of Journey to Integrate the Skies
The Smithsonian Institution exhibit about pioneering black aviators and astronauts soon leaves the continental U.S. for good, but people can still see it until Oct. 4th at the Air Zoo in Portage. WMUK’s Earlene McMichael finds out why the exhibit was created and what’s in it from a Smithsonian official and Air Zoo CEO Troy Thrash. 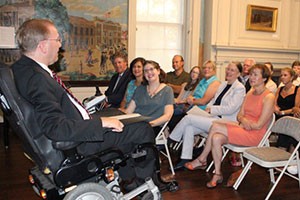 Smithsonian Proportions
While seeing the Hope Diamond or the Apollo 11 capsule may give a sense of awe – and is certainly inspiring – only a vanishingly small number of us will have the opportunity to fly in space or own a 45 karat diamond. Most of us have a GPS in our pockets today to help us get around, though, so when we see Roger Williams’s pocket compass, the connection is instantaneous. I hope this new affiliation will help people around the Ocean State experience that thrill of connection in a state so steeped in tradition and history.

The Anchorage Museum (Anchorage, Alaska)
Anchorage Museum Hosts Arctic Programming During President Obama’s Visit to Alaska
The Anchorage Museum is co-hosting events in collaboration with the upcoming GLACIER (Global Leadership in the Arctic: Cooperation, Innovation, Engagement and Resilience) Conference, an event hosted in Anchorage Aug. 30-31 by the U.S. Department of State and the Secretary of State John Kerry to broaden awareness of critical issues the international community faces in the Arctic. Approximately 150 foreign ministers and 300 members of the international press will attend the conference, with President Barack Obama giving closing remarks. The Anchorage Museum has created multiple exhibitions and programs focused on the contemporary and future Arctic as part of its Polar Lab programming and is home to the Smithsonian Arctic Studies Center.

Space Center Houston (Houston, Texas)
Eleven-year-old inventor takes part in Space Center Houston programs
Space Center also offers Space University. According to the website, “SpaceU is a week long immersive, STEM rich learning experience that teaches not only about space exploration, but about traveling to and sustaining life upon a distant planet. Where better to train like an astronaut than in the very heart of where it all began?

Coming up in Affiliateland in October 2015

Smithsonian that Way
Scroll to top