The National Park Service, in partnership with the Institute of Museum and Library Services, the National Endowment for the Humanities, and the National Endowment for the Arts, awarded $4.8 million in Save America’s Treasures grants to help fund 16 projects in 12 states. Mystic Seaport Museum (Mystic, CT) received two separate grants totaling $736,167 to support the restoration of the L.A. Dunton fishing schooner and critical preservation work for the Rosenfeld Collection of Maritime Photography. Rehabilitation work will ensure it keeps its watertight integrity and structural stability. This project will repair deck beams, hull planking, the stern, and interior ceiling of the ship.

The Putnam Museum (Davenport, IA) received a $10,000 grant from Humanities Iowa, a state affiliate of the National Endowment of the Humanities, for “Literary Heroines: Their Times, Their Fashions.” Apparel and accessories from the Putnam’s collection dating back to the early 1800s will be staged in various vignette displays that tell the story of several heroines. The exhibit will look at the wardrobes and interests of memorable characters such as Hermione Granger of the Harry Potter books, Laura Ingalls from the “Little House on the Prairie” series and Jo March from “Little Women.”

Space Center Houston raised $300,000 for its fall luncheon To the Moon and Beyond honoring legendary flight director Gene Kranz and supporting the campaign to restore Historic Mission Control. Proceeds from the luncheon benefited Space Center Houston’s $5 million campaign, On a Mission, in support of the restoration of NASA Johnson Space Center’s historic Mission Operations Control Room. The restoration will accurately portray how the area looked the moment the Moon landing took place on July 20, 1969.

Giving thanks for all our great Affiliate partners!

OHIO
The Cummings Center for the History of Psychology will present the virtual version of No Spectators: The Art of Burning Man, a virtual reality experience from Intel and the Smithsonian American Art Museum, in Akron, 11.2-3. 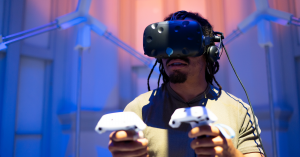 The Western Reserve Historical Society will collaborate with the Smithsonian Center for Learning and Digital Access to offer a day-long workshop for teachers using the Learning Lab online platform in Cleveland, 11.16.

PENNSYLVANIA
The Senator John Heinz History Center will host an Early Learning Conference: Scientific Concepts and Young Thinkers with an educator from the National Air and Space Museum, in Pittsburgh, 11.3. A curator from the National Museum of American History will lead educators and the public through talks related to Mister Rogers’ Neighborhood at the History Center, in Pittsburgh, 11.10-11.

FLORIDA
The Frost Art Museum will collaborate with the Smithsonian Center for Learning and Digital Access to offer a day-long workshop for teachers using the Learning Lab online platform, in Miami, 11.6.