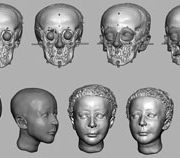 The University of Illinois Roman-period Egyptian mummy at the Spurlock Museum has undergone two radiologic investigations using Computerized Tomography (CT), twenty years apart. In 1990, an interdisciplinary team was convened to investigate the mummy before it went on display. Since autopsy was not permitted, we concentrated on non-destructive imaging supplemented by materials analyses of tiny bits of hardened resin, cloth, and insects from the damaged foot and ankle area of the mummy. The initial results showed that the mummy was a child (because of dental development and open growth plates) with a broken head and a collapsed chest. CT images showed some kind of packing material (cloth or mud?) around the limbs and a wooden, so-called “stiffening” board under the body inside the linen wrappings. The insects turned out to be carrion beetles, implying that the child’s body was in a partially decayed state before it was wrapped up.

The brain, heart, and lungs were still in place inside the mummy, but as our consulting radiologist Dr. Joseph Barkmeier at Carle Foundation Hospital in Urbana, IL, commented, “they’re all dried up and moved around.” Lack of evisceration and a concentration on the exterior decoration instead of tissue preservation are features of many Roman period mummies. So is the wooden board wrapped up underneath the body. The sex of the child could not be determined because the pelvic region was obscured by layers of tissues and wrappings. But identifying the sex of a young child based upon skeletal remains alone is not very reliable in the best of circumstances. 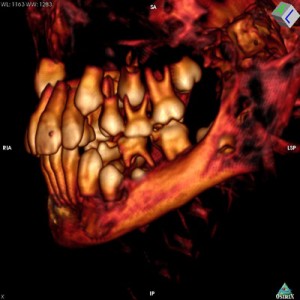 In 2011, we decided to re-scan the mummy utilizing vastly improved imaging technology and computer software. David Hunt, Physical Anthropologist at the Smithsonian National Museum of Natural History, was a consultant on the new project.

Internal organs, packing, and bone fractures are much more clearly visible from the new CT imaging. Dr. Hunt was able to age the mummy child more precisely to about 8.5 years at the time of death by identifying the growth and development of the dentition. However, the measurements of the long bones of the legs were shorter than expected by the dental age, suggesting that the child suffered from some levels of malnutrition or illness. Unfortunately, sex is still unknown because the pelvis is collapsed and cannot be measured for physiological identification and soft tissue organs are not discernable since the densities of bone, tissue, and wrappings are very close in density values, making clear observations problematic.

In the thoracic cavity, desiccated organs lie up against the spine, and the spine shows signs of compression fractures (post-mortem). The occipital fracture is more severe than we originally thought, and a piece of the skull is inside the cranial cavity. Some brain tissue is clearly visible, but it is probable that the embalmers removed portions of the brain through the back of the head, certainly not through the nose.

The 2011 images show that the embalmers used wads of cloth rather than mud or plant material to pad out the thin little body and make it appear more life-like. A recent pigment analysis by the Getty Conservation Institute confirms that the red colorant on the stucco surface is lead oxide, or minium, from Rio Tinto, Spain, and that it matches that of nine other “red shroud,” Roman-period mummies published the new book Herakleides: A Portrait Mummy from Roman Egypt by Lorelei Corcoran and Marie Svoboda. This finding reinforces our conclusion that the Spurlock mummy child came from a well-to-do family in Roman Egypt that could afford expensive ingredients such as the red pigment and gold leaf seen on the mummy wrappings.

At Dr. Hunt’s request, forensic artist Joe Mullins of the National Center for Missing and Exploited Children (NCMEC) used the new CT scans to digitally reconstruct the child’s head and face. The result, with several possible hairstyles, shows that the mummy child was of West Asian or Mediterranean heritage, just as one might expect from the cosmopolitan population living in the Fayum region of Egypt at that time.

For more on the University of Illinois mummy, visit: https://www.isas.illinois.edu/atam/research/mummy/index.html

The Spurlock Museum at the University of Illinois at Urbana-Champaign has been in association with the Smithsonian Institution since 2005. To find a Smithsonian Affiliate in your neighborhood, click here. 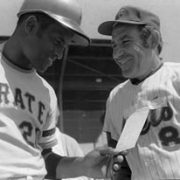 Smithsonian Affiliates across the country are bringing Smithsonian Institution Traveling Exhibition Service (SITES) exhibitions to their communities this winter. Here’s what’s opening at an Affiliate near you: 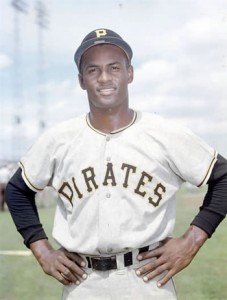 In 1954, Clemente signed with the Pittsburgh Pirates. “I didn’t even know where Pittsburgh was,” Clemente later admitted. This image was taken on the field in 1957. AP/Wide World Photo

November 5, 2011 – January 1, 2012
Reginald F. Lewis Museum of Maryland African American History and Culture(Baltimore, Maryland)
Beyond Baseball: The Life of Roberto Clemente
The baseball diamond has produced legendary athletes who have broken records and shattered barriers. But for many, Roberto Clemente is the most inspiring of all. With a cannon arm and lightning speed, he was an outstanding ballplayer. But the Puerto Rico native was also a dedicated humanitarian.
Special programming in conjunction with the exhibition 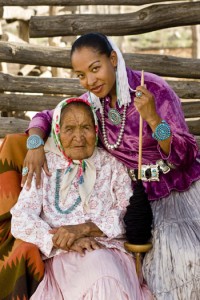 Radmilla Cody, Miss Navajo Nation, and her grandmother, 2006. Radmilla Cody became Miss Navajo in 1997. Although she proved her cultural knowledge, her selection was controversial in the Navajo community because she has mixed race heritage. © 2009 John Running

November 5, 2011 – January 1, 2012
Reginald F. Lewis Museum of Maryland African American History and Culture(Baltimore, Maryland)
IndiVisible: African-Native American Lives in the Americas
IndiVisible: African-Native American Lives in the Americas explores historical and contemporary stories of peoples and communities whose shared histories are woven into the fabric of American identity but whose presence has long been invisible to many in the United States.
Special programming in conjunction with the exhibition: 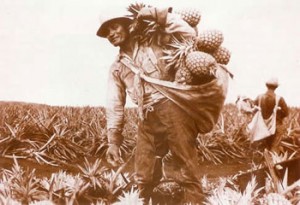 Filipino and other Asian immigrants were recruited as early as the mid-1800s to accommodate the agricultural demands of the West Coast and Hawai’i. Courtesy Center for Labor Education and Research, University of Hawai’i at West O’ahu

November 12, 2011 – January 22, 2012
Sonoma County Museum(Santa Rosa, California)
Singgalot: (The Ties That Bind) Filipinos in America, from Colonial Subjects to Citizens
Today there are more than 2.5 million Filipino Americans in the U.S. Yet many, including Filipinos themselves, aren’t familiar with the details of their history in America: their experiences, rich traditions, and culture. Singgalot is their story.
Special programming in conjunction with the exhibition: 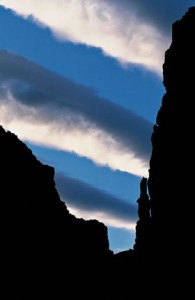 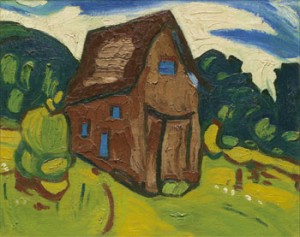 December 24, 2011 – March 18, 2012
Mennello Museum of American Art (Orlando, Florida)
William H. Johnson: An American Modern
A virtuoso skilled in various media and techniques, William Henry Johnson (1901-1970) produced thousands of works over a career that spanned decades, continents, and genres. Now, on view in its entirety for the first time, a seminal collection covering key stages in Johnson’s career. This exhibition of 20 expressionist and vernacular landscapes, still life paintings, and portraits explores the intricate layers of Johnson’s diverse cultural perspective as an artist and self-described “primitive and cultured painter.” 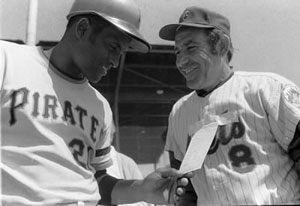 January 21 – March 18, 2012
Orange County Regional History Center (Orlando, Florida)
Beyond Baseball: The Life of Roberto Clemente
The baseball diamond has produced legendary athletes who have broken records and shattered barriers. But for many, Roberto Clemente is the most inspiring of all. With a cannon arm and lightning speed, he was an outstanding ballplayer. But the Puerto Rico native was also a dedicated humanitarian.
Special programming in conjunction with the exhibition: