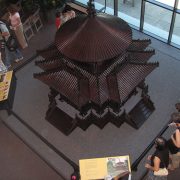 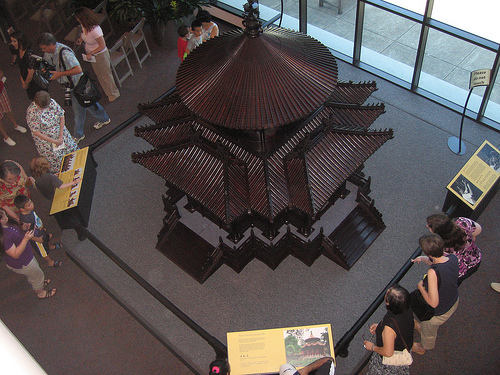 The Ten Thousand Springs Pavilion at the Irving Arts Center

We try to make the most of our visits to Smithsonian Affiliates and especially enjoy the vitality and diversity of our partners in the Dallas area.  The catalyst for this trip, July 12 – 15, was the opening of Within The Emperor’s Garden: The Ten Thousand Springs Pavilion at the Irving Arts Center.  Director Richard Huff and his staff did a magnificent job of situating this intricate and massive structure and accompanying text and graphic panels in the Center’s main lobby.

The Smithsonian’s Museum Conservation Institute organized the exhibition;  conservator Don Williams and his team of volunteers assembled the 3,000 pieces – a show all by itself.  Opening day featured family-friendly activities ranging from Chinese calligraphy to Tai Chi.  Paula Wallace, President of the Savannah College of Art and Design greeted guests, as did Tsai Lien, General Counsel in Houston of the People’s Republic of China, and other officials from the city of Irving.  The exhibition stays on display until July 2010.  If you’re in Texas, stop off and see it.

And if you have a few more days, check out the other Affiliates on my route: The Women’s Museum: An Institute for the Future; the Museum of Nature and Science; the African American Museum; Frontiers of Flight Museum; and a little further away but well worth it, the Star of the Republic Museum in Washington, birthplace of Texas independence.

Thanks to Affiliates in Dallas, visitors can see our national collections – from space capsules to sports history – upfront and expertly displayed.  The lone star shines very bright on Smithsonian Affiliates deep in the heart of Texas. 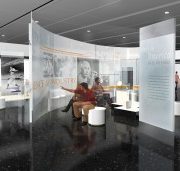 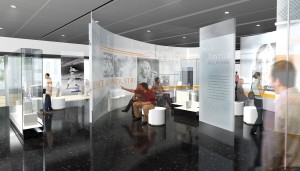 Rendering for the future Only in America gallery.

Thanks to Ilana Blumenthal, Public Relations Associate at the National Museum of American Jewish History, for this guest post.

My first vote is going to the Marx Brothers. That’s an easy one. Their quick wits and dry humor have filled both my childhood and adulthood with laughter, and to me, humor is one of the greatest contributions one can make to society. I can’t forget Richard Rodgers or Stephen Sondheim. At the age of 27, I have found that their music and words have taught me more about the world, history and human nature than textbooks ever could have and with much more color and passion. Additionally, I have lived my life as a committed Zionist, so Golda Meir or Henrietta Szold also make my list of the top 18 American Jews that I feel have made the biggest contribution to society. Who will make yours?

The National Museum of American Jewish History launched a website, https://onlyinamerica.nmajh.org/, that asks the public to help select who will be included in our Only in America® Gallery/Hall of Fame, which will be a signature component of the core exhibition when the new Museum opens in November 2010. Situated on the first floor of the Museum, the gallery will examine the choices, challenges and opportunities that have been faced by a remarkable group of American Jews on their paths to accomplishment through featuring major film productions, original artifacts, and an interactive database.

Visitors to the website will have the opportunity to vote on a list of 218 candidates in the fields of Arts and Entertainment; Business and Philanthropy; Literature; Performance; Politics, Law and Activism; Religion and Thought; Science and Medicine; and Sports. Participants can also cast write-in votes. Voting ends Thursday, August 6, so hurry.

Irving Berlin. Levi Strauss. Steven Spielberg. Albert Einstein. Rebecca Gratz. Sandy Koufax. Molly Picon. Which Jewish Americans should be recognized in a major museum exhibition? The National Museum of American Jewish History is inviting you to tell us what you think. Let us know.

The Museum is constructing the new 100,000–square-foot, five-story building on Independence Mall in Philadelphia. It is dedicated to telling the still-unfolding story of Jews in America, who embraced freedom with its choices and challenges as they shaped and were shaped by our nation. The Museum envisions its new home as a place that welcomes all people, inviting them to discover what they have in common with the Jewish experience in America, as well as to explore the features that make this history distinctive.

Which one will you choose?

On Monday July 12, Smithsonian Networks launches the second season of its signature series, “Stories from the Vaults” with a look at the incredible, edible Smithsonian.  It features Native cuisines and collections of the Pacific Northwest at the American Indian Museum (think: salmon!), and the origins of the American coffee break in the American History Archives (enter: Krispy Kreme).  The final segment is on the mechanics of eating and the toll food takes on our teeth, featuring our very own Baltimore Affiliate, the National Museum of Dentistry.  Go behind the scenes with the Dentistry Museum‘s curator Scott Swank, as he shows off historic extractors and toothbrushes and other items from their collection.

To watch the whole show, click here.  Bring your appetite, and enjoy!