It’s March, and spring is finally upon us.  And so is Women’s History Month.  You go girl!

Heritage Months are a big deal at the Smithsonian, and now, the offices devoted to national outreach are getting into the game as well.  For each of the five months celebrated by the Smithsonian (Hispanic Heritage, Native American, Black & Women’s History, and Asian Pacific American), the offices of Smithsonian Affiliations, Associates, Education and SITES are publishing lists of germane heritage month events around the country.

Where can you find these listings?  Smithsonian Magazine is a great source – check out what they did for the ‘Around the Country’ section of their Black History Month celebration.  This site will be updated each heritage month with the appropriate affiliates, SITES shows, and programming.  SITES also does their own highlight of heritage months in their ‘What’s New’ section.  Finally, SI Education has a website devoted to heritage month programming at the Smithsonian, and we’re working to incorporate national events here too.

What does this mean for you, as an Affiliate?  If you have particular events, programs, or exhibitions that you would like highlighted during a heritage month, please email them to your coordinator for inclusion in the listing.  Our office compiles information about Affiliate activity approximately two weeks prior to the start of a heritage month for all appropriate contacts, so let us hear from you!  We’ll be sending submissions for Asian Pacific American Heritage Month by March 14.

One of my favorite parts about this job is when Affiliates come to DC to visit, either bringing their members, their boards or staff.  Why?  We get to connect with Affiliates and their goals in very tangible ways.  AND, it usually means we get to meet new people and see cool stuff!

Last week, we got a visit from a group of staff of the Mashantucket Pequot Museum in Connecticut.  The Museum received an IMLS planning grant to prepare for a major overhaul of their permanent exhibition galleries, and were here to consult with staff of the American Indian Museum about working with Native communities to share their stories.  We had some *great* chats, about building trust, sharing ownership, visitor vulnerability (there’s one to wrap your mind around) – all kinds of juicy museology-esque topics that have such important bearing on a successful museum visit.

We also got a glimpse into the Pequot collections in the American Indian Museum’s wonderful storage facility.  Lots of interesting baskets, beadwork, bows and arrows.  Check out this one – ! 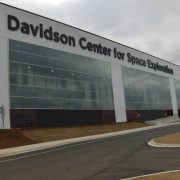 as reported by Caroline Mah, coordinator for the southeast:

Not only does January 31, 2008 mark the 50th Anniversary of America in space, but it also celebrates the U.S. Space and Rocket Center’s (Hunstviille, AL) official opening of their new Davidson Center for Space Exploration, home to the recently-restored Saturn V rocket.  This spectacular $22 million facility was named after Julian and Dorothy Davidson, who contributed $2 million. When you first enter the building, you have to walk up a flight of stairs to actually enter the space that holds the Saturn V rocket. Once you enter the space, it’s difficult to describe the enormity of the rocket.  After many failed attempts at getting a shot of the whole rocket, I just settled for the best angle I could find. Harold Closter and I had the great honor of attending U.S. Space and Rocket Center’s VIP reception, which was attended by some 1400 guests. Just the massive size and space of the building seemed to drown out the sounds of conversation amongst the 1400 guests. With everyone gathered under one roof (68,200 sq. ft) and under one rocket, which stands ten feet above the ground, the highlights of the evening began with a gala dinner, an awards ceremony, and grand opening of the imposing Davidson Center for Space Exploration.The speakers themselves were awe-inspiring, mostly ranging from retired astronauts Buzz Aldrin, second man to step on the moon; Jim Lovell, Apollo 13 Commander; John Hendricks, CEO of the Discovery Channel; and Konrad Dannenberg, believed to be the eldest of the surviving members of the von Braun rocket Team.   Walter Kronkite, legendary CBS journalist and receipient of the Center’s  Lifetime Achievement Award along with Konrad Dannenberg, sent a speech which closed by declaring, “[Hunstville] is and always will be; the Rocket City. And that’s the way it is, Thursday, January 31, 2008. Fifty years to the hour [that America entered space]. This is Walter Cronkite. Good night.”